You're hungover, you have to go to work, are you even really awake? Maybe it's Saturday! No, it's Monday. Noooo. Why did you drink all of that Old Grand-Dad last night? What will end this waking nightmare? You put on your shades, head to McDonald's, and order enough flapjacks to soak up whatever the hell you put in your body last night. You snag a couple of seats on the train, one for you and one for your backpack, and hunch over as you Hulk out into a litterbug monster. 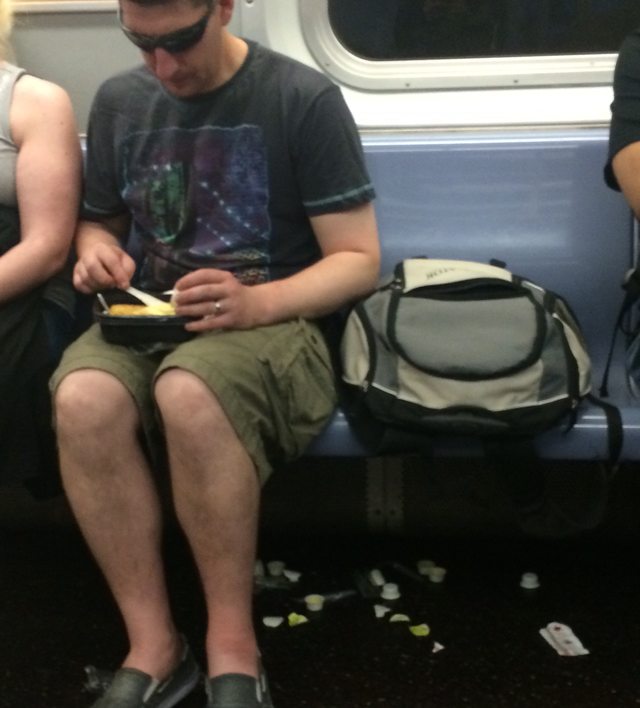 Photo by Gina from Brooklyn

A tipster spotted this man on the L train on Monday morning during rush hour, and tells us what fresh hell was wrought:

"I thought you might get a kick out of this asshole. I watched him in the morning on the L train from Halsey Street all the way to Union Square. In that time, he ate a full course meal, took up the seat next to him with his duffle bag, and littered EVERYWHERE. First, he ate three (THREE) flapjack meals from McDonalds—if you look closely you will see three black trays in his hands. He doused them all in butter and maple syrup and then threw all the trash under his legs in front of everyone.

The smell permeated the entire subway car and I'm pretty sure clung to my hair and clothes for the rest of the day. But I couldn't move. I couldn't look away. It's not even the fact that he littered, but the sheer AMOUNT of trash... he had to have used 20 butter packets, followed by maple syrup, the fork and knife he used to cut his cakes, three trays, followed by a to go cereal box of Fruity Pebbles, and a school-sized carton of milk.

And this dweeb is married! AND I'M NOT. WHAT THE FUCK."

Sir, we're going to have to revoke your MetroCard.

#litter
#subway etiquette
#original
Do you know the scoop? Comment below or Send us a Tip