[UPDATES BELOW] Yup, that appears to be a picture of the adorably whiskered face of a rat (mouse?) poking out of someone's wrap sandwich from Chop't. Forest Hills dweller Steven Henderson Tweeted the above photo earlier this afternoon after a colleague allegedly found the unwelcome ingredient guest inside their sandwich after they'd already taken a bite. Good luck ever eating again, unfortunate lunch eater. 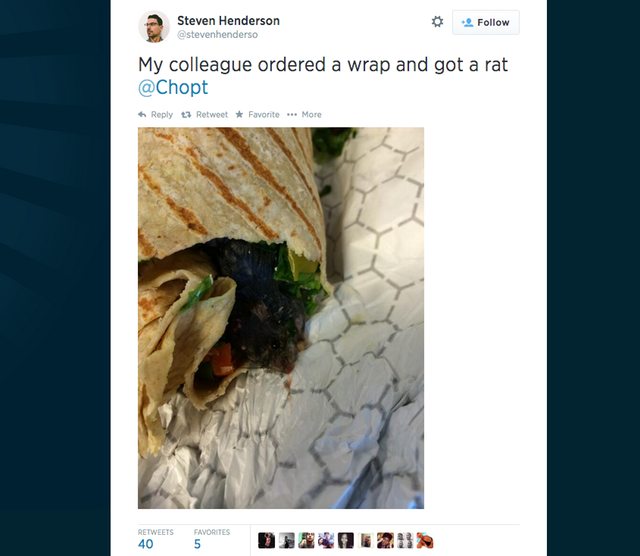 The Financial District location of this Chop't store at 80 Pine Street has boasted an A rating as of its most recent inspection in September of last year, though after today's debacle the Health Department may revise their findings. 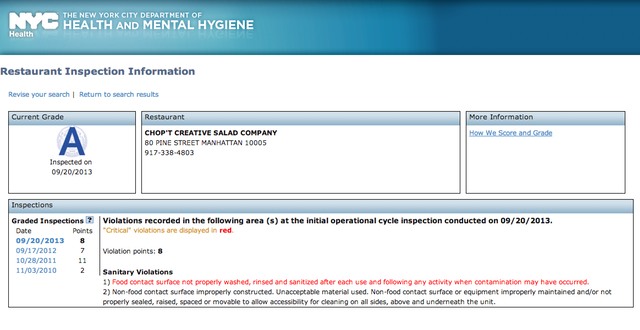 When reached via phone, Chop't Founder Tony Shure told us he knew about the incident and said that the store had been shut down for the day, adding that staff was "doing a deep clean." An employee at the 80 Pine Street location confirmed that the location is currently "closed for maintenance." We reached out to the afflicted parties in #RatWrap2014 and will update when we hear back.

Update 5:48 p.m.: Steven Henderson, the Twitter user who first published the photo, has since deleted his Chop't-related Tweets and declined to answer questions. He also refused to put us in touch with his colleague who allegedly ordered the wrap. In an email, Henderson said, "I've had enough of this topic for one day. I saw your blog post. I've taken down the twitter post because it's caused quite the uproar and I need to get back to work."

Another Twitter user who posted a photo of the wrap from a different angle has also deleted her Tweets, and responded to our inquiries via Twitter thus: "Thanks but it's time to wrap this up and put #ratwrap2014 behind us." So it's possible this is all just an elaborate hoax orchestrated by a Chop't competitors!

Update Wednesday 10 a.m.: A witness to yesterday's sandwich discovery confirms the photos are real. "My colleague ordered from Seamless and it was delivered to our office. Nobody on the receiving end saw the wrap being prepared." Chop't also confirmed the discovery and released a statement on their website: "Although none of the inspections at this location indicated any problems, we immediately took action. Those actions included closing the location temporarily in an abundance of caution in order to conduct a thorough inspection of the entire facility. Also, we have requested an inspection by the NYC Department of Health tomorrow morning in preparation for our reopening."

Remember when it was just frogs?

#chopt
#down with wraps
#ew
#mice
#rat wrap
#wrats
#original
Do you know the scoop? Comment below or Send us a Tip