Nashville Hot Chicken, Mission Burritos, Rochester Garbage Plates, Cincinnati Chili, New Orleans Po Boys, NYC Bagels... the list of regional specialties that local residents get insanely defensive and haughty about goes on and on. "This is NOT how it's done," they snort, eating a dish beloved in their youth in a place far from home.

Well now Eastern Pennsylvania transplants in our fair city can quit their griping about the lack of "authentic" Philly Cheesesteaks here, because one of their own has finally moved to town. Opened on April 1st, the first-ever NYC outpost of the fast food cheesesteak chain Tony Luke's is now slinging its goods in Downtown Brooklyn, which franchise owner Mohamed Assaedi calls "the new heart of the city."

The Downtown Brooklyn Tony Luke's is located on a busy corner of Flatbush Avenue, surrounded by construction sites, honking drivers, and numerous other fast-food spots. Even amid the chaos the place is hard to miss, with its bright-red facade and neon signs filling every window. Once inside you will not forget where you are, as the busy decor consists almost entirely of photos and caricatures of Tony Luke himself. A large team of friendly staffers pack into the small kitchen/ordering counter area, and even when the place got crowded, the sandwiches came out quickly. There's no seating here, just standing counters, which helps clear people out as well.

The menu appears to be pretty much the same as all the other 13 Tony Luke's, with multiple varieties of Beef Steak, Chicken Steak, and Roast Pork Hoagies, as well as a bunch of french fry options and "sides" like chicken wings. There's also a full slate of breakfast sandwiches, served until 11 a.m. I'll leave it to South Philly transplants to comment on whether the Brooklyn versions of these beasts are as "good" as they were back home, but I have some thoughts, based on a late afternoon feast earlier this week.

The best sandwich I ate, and by a considerable margin, was the Roast Pork Italian hero with sharp provolone. It was juicy, full-flavored—the fried broccoli rabe is a key addition—and it all worked together well, though you will definitely need both hands to keep everything from toppling onto the floor.

Much less interesting were the two cheesesteaks we devoured, both "Wit" (fried onions), one with Cheese Whiz, the other with melted American. I don't really remember which one I preferred, which probably means the answer is "neither." I was surprised at how lacking in grease and cheese these were—looking at photos from another South Philly favorite, Dalessandro's Steaks, it seems that that's the way it's done, but I don't know, I thought they were just kind of bland. The bread was heavier than I wanted it to be, too, and kind of overwhelmed everything inside.

You'll be tempted to supplement your sandwich with, say, some Salt and Vinegar Fries, or even a little boat of Mango Habanero Boneless Wings, but you're better off not doing either of those things.

Owner Mohamed Assaedi says he dreams of opening six more Tony Luke's restaurants in the area, one in each of the other boroughs, one in Yonkers, and one out on Long Island. Please let me know, all you Phanatics, where and if there are other/better examples of Philadelphia's great culinary triumph in our midst. 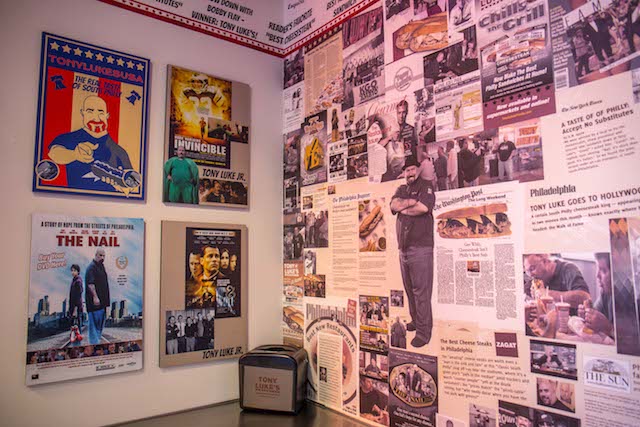