Federal Donuts, a cult favorite in its native Philly, landed in Chelsea Market on Friday morning, bringing three flavors of their signature "hot and fresh" donuts to a cadre of Manhattan followers. The pop-up ran in the Dizengoff space until 10 a.m., serving coffee and donuts to a small crowd of pilgrims, some of whom had planned their morning around the chance to snag one of their beloved Federal Donuts without the trip to Philadelphia.

Creators and co-owners Mike Solomonov and Steven Cook, who also own Dizengoff, left Philadelphia for New York at 4:30 a.m. this morning, but they had smiles on their faces (and a cup of coffee on hand) as they chatted with guests and customers. A line formed early on, but head chef Matt Fein and his team kept up a steady rhythm to supply time-crunched New Yorkers with their morning sugar buzz.

The pop-up featured three flavors of donuts—Apollonia, Indian Cinnamon, and Strawberry Lavender—alongside coffee from Ninth Street Espresso. As with all Federal Donuts, the goods were made on the spot, and came out hot, to the delight of loyal fans. The dough itself includes the Middle Eastern spice mix baharat, an influence from another Solomonov / Cook operation, the popular Israeli restaurant Zahav.

The pop-up also provided an opportunity to celebrate the launch of their stylish new cookbook, the aptly named Federal Donuts: The (Partially) True Spectacular Story, which describes their journey alongside 25 recipes for making both donuts and Federal's other speciality, Korean fried chicken, at home—no doughnut robot required.

"We started this thing six years ago for $35,000 and it was just kind of a lark. Even when we committed to doing it, we still didn't know how to make doughnuts," Cook told Gothamist this morning. "So we searched out this thing called a doughnut robot. They were quite expensive new, and we found this used one...we went into Harrisburg and paid cash for it in the parking lot of a fast food restaurant. And then we had to figure out how to put it together and make it work." 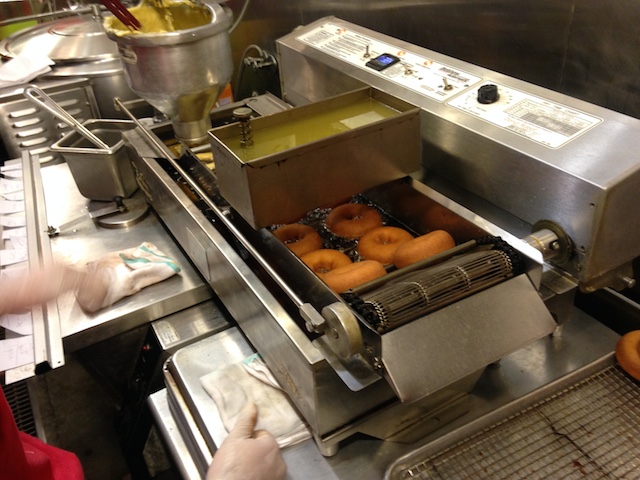 Solomonov described the evolution of the venture as "organic" and "not at all calculated." "We didn't use the term 'scalable' at all," he noted. But scale they have. "Federal wasn't planned," said Cook. "It was just one of those things that happened, and before we knew it, we had a second one, and a third one, and a fourth one."

The question on everyone's lips was whether Federal would be opening a permanent New York location in the near future. "We would love to open in New York," said Cook. "We opened Dizengoff a little over a year ago, and coming to a new market is always challenging, so I feel like we're just starting to feel like we know what we're doing here. I think New York would be a natural for Federal, so we'll have to see today how people like it." Based on the lively line—and the pleas from fans—it would seem the verdict is in.

Nicole D'Andrea, 33, and Scott Schubert, 39, of Brooklyn got up early to make a special stop on their way to work after seeing news of the pop-up on Twitter. They had been to the shops in Philly several times, but they were thrilled to see Federal guest starring in Chelsea Market. "I wish they would come to New York, but then I would be 500 pounds. So that's the problem," said Schubert. "In Philly, [D'Andrea] yells at me because I'll come back to the room, and she'll be like, 'How many did you get?' And I'll be like, 'Oh, just a dozen.'"

"The 'hot and fresh' are awesome because they're warm, they make them right there," said D'Andrea. "A lot of places, they make the doughnuts and then they sit."

"Especially in New York," said Schubert. "You'll go to a place and it'll be 3 o'clock, 4 o'clock...but then the doughnuts have been sitting around a long time. With FedNuts [in Philly], you can go at like 4 o'clock, and they're like, 'Here, we just made this is front of you' and it's hot and it's delicious. It's so much better."