Though it's eventually transitioning most of its cooking lessons and dining and experiences over to Industry City, the original Williamsburg location of The Brooklyn Kitchen still throws intimate dinners and classes under the BQE, recently hosting Iranian-born Soli Zardosht for an introduction into Persian cuisine.

"These recipes are centuries-old, they're ancient," Zardosht explains. Persian people are very protective of not changing them and of keeping them a certain way, not messing around with a dish because it's already perfect. In particular, for this dinner series, the idea is to introduce people to as many flavors as possible. I'm bringing in a little bit of each of my travels. I really enjoy taking a little bit of this, a little bit of that, I don't stick to traditional recipes. My approach to food, and Persian cooking in particular, is to be more playful and less stuck in the old ways."

Zardosht's cuisine reflects a life spent in multiple parts of the world. She left her home in Iran as a child at the start of the Iran/Iraq war, settling with her family in the UAE but still visiting her birthplace during summers following the conclusion of the war in 1988. As a teenager, she relocated to London, where she studied fashion but then pivoted into the food industry, running a stall on Broadway Market and eventually running her own kitchen. Last year, she moved to Brooklyn to marry a local musician, along the way finding her own culinary avenue on this side of the pond.

A large part of Zardosht's recipe-creating process includes what the final product will look like visually—a holdover from her work in the fashion industry—sometimes leading to a days-long process looking for just the right shade of pink radishes to add to a dish.

"Way before I thought about what kind of food I wanted to be serving, I remember having a color palate," Zardosht recalls of her early days in market vending. She would even imagine the colors of the tablecloths and their interplay with the way a dish would look on the plate. 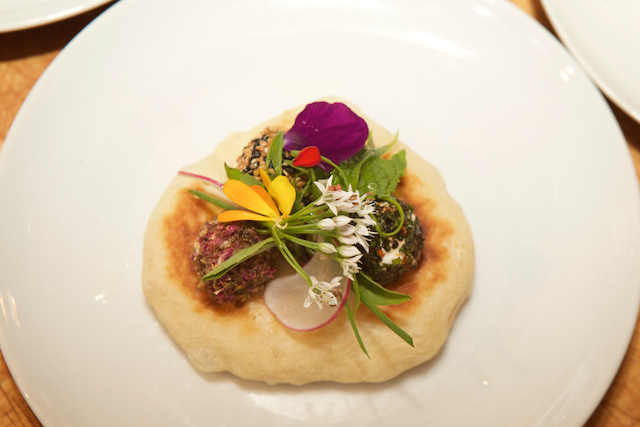 Her vision of aesthetically-pleasing food—that also tastes good—becomes evident from the first dish presented at one of her dinners. Recently, that was a circle of pale beige flatbread topped with labneh coated in herbs and seeds, with walnuts, radishes and edible flowers. The second course—a puree of turmeric-spiced peas—was equally arresting, a bright yellow sea punctuated by pops of black chili and roasted vegetables.

"One reason I started serving food in London was because I was so tired of people going, 'Oh Persian food, chelo kabob,'" Zardosht says of stereotypes about Iranian food, in particular the rice and ground meat dish common to Persian restaurants. "That's so different from the stuff that we grew up eating. I was always really frustrated, thinking there was so much more to Iranian food."

My Persian dining companions at a recent dinner hosted by Zardosht become particularly excited when the tahdig—the browned, crunchy rice atop a mound of more fluffy, herbed rice—arrived at the table. Same with the kookoo, a frittata-esque egg dish that's traditionally served as part of a mezze platter or as a light supper with bread, salad and yogurt in Iran. 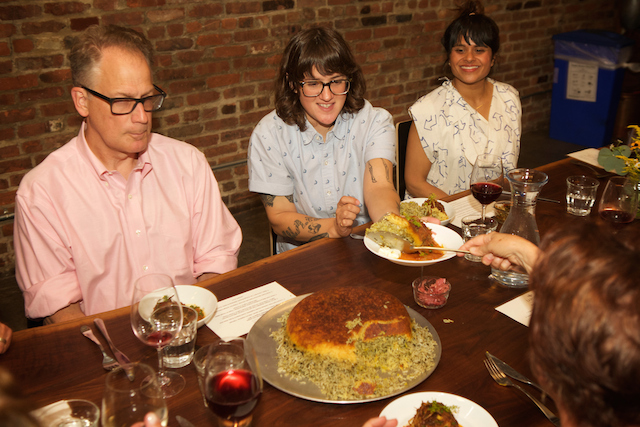 The communal aspect of the Persian family meal is evident at Zardosht's dinners, too. The meals are staged at one large table and many of the courses are served family-style, compelling diners to interact with one another at the very least to ask to pass the pickled vegetables accompanying bowls of meatballs, or to pass the mint and rose yogurt meant to be dolloped on as a sauce.

Like many people who've immigrated to NYC, Zardosht hopes that through her dinners, people will gain a more comprehensive understanding and appreciation for Persian culture.

"I like the way that, through food, I'm making a connection to things I consider Persian, things Iran is famous for. Poetry, food, literature, song. I really like making this connection to these things that go back centuries but really get lost in today's politics. Unfortunately, a lot of people don't know much about Iran apart from the stuff that's discussed in politics that we hear about every day."

Soli Zardosht will be back cooking at the Brooklyn Kitchen on November 11th and January 21st. Stay tuned to their website for tickets to go on sale.