Pedro Espada's Fave Restaurants Where You Paid The Bill

The Post reports, "He billed his publicly funded health clinic about $103,000 for meals between 2005 and 2009, including more than $20,000 for a staggering 214 visits to a single sushi restaurant. He rang up another $63,000 in bills for nearly 400 meals at nine other eateries. Representatives of all 10 restaurants have testified at Espada’s embezzlement trial in Brooklyn Federal Court that family members regularly dined with Espada — and none of the meals appeared to be business expenses." 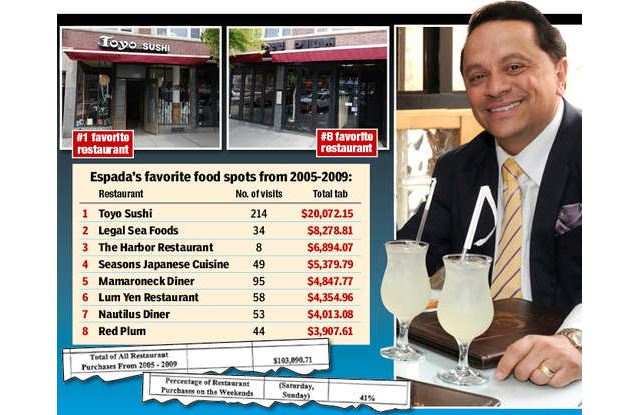 The Post's lede was "For a pig, he loves his sushi."

Toyo Sushi, Pedro's #1 restaurant, is in Mamaroneck in Westchester County and its food gets a 22 from Zagat. Of course, Mamaroneck is where Espada has a controversial home. Besides prosecutors saying he also billed taxpayers for his sweet white picket fence there, it seemed as though Espada was spending more time in Westchester than the Bronx district he was elected from. After losing re-election, Espada sold the Bronx apartment in 2011.

Yesterday was the beginning of Espada's defense team's presentation of witnesses. But that didn't go so well: First defense witness was management consultant Cynthia Prorok, who said, “The [Soundview] staff I met with seemed nervous and guarded. You could cut the tension with a knife... It was very controlling. It was like being in an episode of ‘The Sopranos.'" Then, when Prorok says she asked about Espada's crazy-high salary and benefits package of $600,000+ (a lot higher than other health clinic administrators) and went to look at his personnel file, Espada grabbed it from her and "caused my calculator to fly under the table."

#corruption
#pedro espada
#soundview health clinic
#sushi
#toyo sushi
#westchester county
Do you know the scoop? Comment below or Send us a Tip