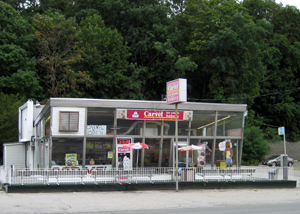 First the financial crisis, now this. Nostalgic sweet tooths are now screaming vainly for ice cream in Hartsdale, New York, where the first Carvel on earth closed yesterday after more than seven decades in business. Legend has it that company founder (and beloved commercial spokesman) Tom Carvel opened the depression-era soft serve icon at the location because that's where his self-made frozen custard trailer broke down with a flat tire on Memorial Day 1934—business was so good at the spot he stayed put, built the store, and even lived out back with his wife for a while.

Carvel died in 1990, but his legacy lives on in 500 Carvel stores, in frozen desserts sold in 8,500 supermarkets nationwide, and in those distinctively amateurish commercials. The Hartsdale property, 25 miles north of Manhattan, was bought from the Carvel Foundation two years ago and the owners say high taxes have made the frozen dessert game unsustainable. So they'll be replacing the ice cream stand with a restaurant, which is always a sure-fire money maker. After the jump, a couple classic Reagan-era Carvel commercials.

#carvel
#close
#closed
#closing
#first
#hartsdale
#ice cream
#last
#new york
Do you know the scoop? Comment below or Send us a Tip