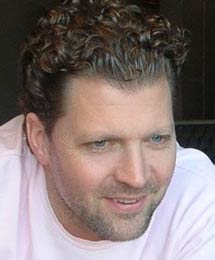 Earlier this year, vintners Paul Wegimont and Greg Sandor opened Bridge Urban Winery, an offshoot of their North Fork vineyard. Nestled by the Williamsburg Bridge in a blossoming artisanal corridor that includes Marlow & Sons and Diner, their sleek yet cozy wine bar specializes in strictly New York State wine, as well as food pairings prepared with all locally-sourced ingredients.

On Sunday Bridge will host a seasonal, three course Bloody Mary brunch (made with farm fresh organic tomatoes) on behalf of the Greenpoint-Williamsburg CSA. The CSA, or "community supported agriculture," is a partnership between an organic farm on Long Island and Brooklyn residents who, by buying a yearly membership, are regularly provided with seasonal produce. All proceeds from Sunday's brunch go toward providing fresh organic produce for the Greenpoint soup kitchen. [Tickets are $40, with seatings between 11am and 1pm. Email gwcsafundraising@gmail.com for reservations.]

Besides your proximity to the Williamsburg Bridge, what else is behind the name of your establishment? It's really this concept of creating bridges between food and wine, and Long Island and Manhattan. We took over an existing vineyard in 2001 that was on Bridge Lane on the North Fork of Long Island. The first thing we realized was how there was a huge gap between these vineyards on the North Fork, while seventy miles away there was the amazing city of New York where you could barely find a New York wine. They were there but people didn't really know, for the most part, that we had thirty-some wineries on the North Fork, right by the Hamptons. So we wanted to bridge that gap. It's like the phenomenon of Napa Valley where you have an amazing amount of wineries and vineyards that are just sixty miles away from San Francisco. Granted, New York is a younger wine region but there is a gap there. And the other gap we wanted to bridge has to do with an attitude toward wine in this country. It's unlike Europe where it's almost second nature to have wine with a meal.

Do you sell other wines besides what comes from your North Fork vineyard? Yes. We hand-select other ones from out there, like Eric Fry, Kip Bedell. People we hand picked and wanted to bring into our tasting room.

And all the wines are from New York State? Yes, it's all New York-centric, at least for the first year or two. We wanted to bring our private label wine, Bridge, to New York City, and also open people's eyes to other great New York wine.

And all the ingredients in the food you serve is locally sourced? It's completely from farms on Long Island, Hudson Valley, the Finger Lakes and sourced throughout New York. Since we were bringing in hand-crafted wine we were making ourselves, we thought we should do the same with the food. For instance, there's no reason to import cheese from France because if you actually know the area there are amazing cheeses right here in New York State. We have three cheeses from the Hudson Valley alone; it's amazing what's out there in our own back yard in terms of quality, both for wine and cheese. So we decided to make our menu around what ingredients we locally source. We also go to the Greenmarkets in Union Square and McCarren Park.

There's been some talk recently about wine companies packaging wine in boxes to reduce the carbon footprint. We're all over that. My business partner Greg Sandor has been doing this for twenty years; he brought his experience from Sheldrake Point, which is in Ithaca. We've been waiting for the right boxing material because not all of it is eco-friendly stuff. We've gone through a lot of samples and dealt with a lot of different companies and now we have two companies that are actually doing it in a bio-degradable, eco-friendly way. Believe it or not, most of the boxes being used for wine right now aren't recyclable.

And what about the taste; what do you say to people who think it won't taste as good? That's the problem with the wine world. You don't want to insult anybody but that just isn't the case. It's like the analogy between cork vs. screw top. The truth is that the screw top is actually better. And box wine is equal if not better at preserving wine in bottles. Now, that may not be what people want to hear because they want their bottle and their cork, but there are other standards we are very serious about upholding. Especially since we're running our business with this farm-intensive relationship. 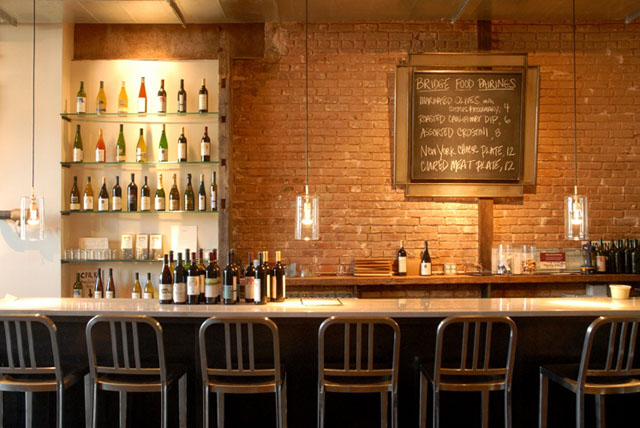 What else do you do at Bridge that's environmentally sustainable? Really, the biggest thing we're doing is going local on pretty much everything we can. That's our first step. We actually believe in local more than green organic. We feel the farm to table concept is, in our view, the best way to implement a green solution, whether it's reducing the carbon footprint or just saving the small farmer. We run a really small, efficient operation; we're not a huge vineyard with a lot of waste. All our glass is recyclable, we recycle our corks, we have recycled labels – little things like that. But I think the bigger picture is our focus on local and community supported agriculture. We're part of the C.S.A. [Community Supported Agriculture] and are going to have a C.S.A. brunch here Sunday.

Do you use food from the C.S.A.?
Oh yeah. In addition to sourcing from the local markets, we are members in two C.S.A.s, one right here in Greenpoint and another one in the city.

What's the Sunday brunch about? The theme there is obviously C.S.A.s in general and we want to bring all of these people who are involved together and raise awareness that there is another place here in Williamsburg where you can get locally sourced wine and food. The brunch is a fundraiser to raise some money for the C.S.A. to provide locally-sourced, organic produce and vegetables to the Greenpoint Soup Kitchen.

And what is the C.S.A.? The general concept of community supported agriculture is that you buy a membership in what is basically a big farm co-op. They bring the fresh fruits and vegetables to you in the city, which is similar to the farmers' market but it's run by members.

The Sideways rap against Merlot: Justified? It is not. I think it was more about making fun of the wine snobs, as you should. The thing we try to do here is break that assumption about wine – that you have to know about it and be educated before you can drink it. We see wine as a way to bring people together, which goes hand-in-hand with our support of the C.S.A. Wine is something everyone can participate in, but it's gotten this reputation as being snobby. Of course, in Sideways, they beat on Merlot. I wouldn't say it's justified. There are wonderful Merlots that are as good as any wine out there. That particular movie certainly gave Merlot a bad name.

What is one of your favorite wines? I'm more and more into what's happening in Hudson because they're using native grapes up there and not getting stuck to the same four or five main varietals. That's one of the reasons why we're looking to plant up in Hudson, because they've got great local indigenous grapes up there. Much like the C.S.A., the concept is to grow what that particular land is calling for. Don't try to grow Pinot Noir in a place that Pinot Noir didn't originate from. You can do that, but you're going to face complications and why not try to create something from what the land is suited for? For me, I like some of the different strands that are out there with the native, indigenous grapes that are popping up all over New York. Our next vineyard will be totally biodynamic and utilize local grapes.

Biodynamic? Yes, for instance, when you're planting a vineyard, instead of tearing everything out, all the trees and other vegetation, you do it dynamically with what's growing there. If you're growing alongside an apple orchard or some different other fruits you're growing, it's meant to be planted in conjunction with, not in replacement of. That's the other thing we want to bridge, this implementation of biodynamics.