Food truck backlash, meet your match. Raised in the America where catfish is served fried and dressed and crawfish boils are the social events of the week, the team behind Jen-N-Outlaw's Fish Fry Truck decided to bring the culture to the east coast. And, speaking from experience, they know what they're doing. Parked outside the Morgan Street L stop, their patriotic truck is complete with a picnic table, brown paper tablecloth, and at least 100 pounds of crawfish boiling away to be served until the last one has been cracked. We visited the truck this weekend to talk to them about the food trucking business, and just how one explains how to suck the head of a crawfish to sophisticated New Yorkers. We also got free pie.

When are you guys going to be open?
Paul: Right now we're just doing Saturdays.
Jen: We might start doing Fridays and Sundays soon. We want to keep so it's not an event.
Paul: We want to keep the anticipation up, gotta be waiting for it all week. Which is really what's happening here.

So the response has been really good so far?
Paul: Oh, we've been getting a fantastic response, people love it.

Where do you guys get your crawfish?
Paul: We get it from Louisiana, it's overnighted. We get them the morning of and they last all afternoon. We just cook them 'til we're done then we close up the truck and go home. Literally we had people going around the corner when we opened up at noon, people have been waiting. It's really fantastic. People like to get together, and they're waiting for the crawfish together. Hanging out for the 15 minutes or however long waiting back there.

That's smart to have a table back there.
Jen: You can see it's all hydraulic so it comes down and goes right back up.

Were you expecting this kind of response to the project?
Paul: We knew it was an awesome idea.
Jen: We sort of just did it, but this has been our weekend, you know? And this is the first time we've actually been able to relax. But it's been really late, how long people wait. Like last week it was people waiting for 55 minutes for their food. And they're not complaining! Just like, happily waiting.

[The interview is interrupted when a local customer gifts Jen and Paul with some homemade peach and blueberry pie, fresh from her oven.] 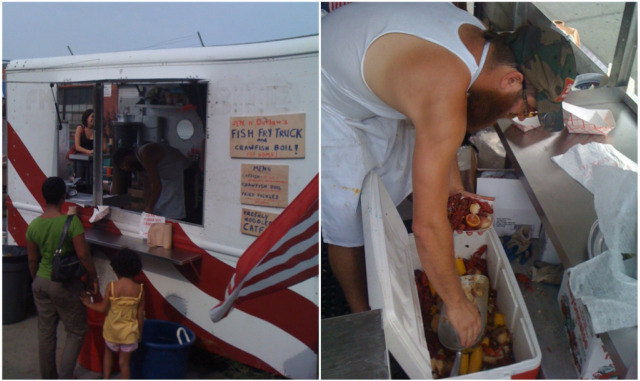 Do you have to teach people how to eat crawfish?
Paul: Sometimes we'll do a little demonstration for everyone doesn't know how to eat crawfish. So we do the whole little thing for them. With the pinch the tail and suck the head and all of that. It's a really good experience. We get 'em live, and a lot of people haven't seen this kind of stuff before so it's really funny.

Are you planning on doing a liquor license at any point, or you can't do that with a truck?
Paul: Everyone I've talked to says it's just impossible.
Jen: It's all about finding loopholes.
Paul: I mean it would be amazing; what goes better with crawfish than ice cold, delicious ber?

What first have you guys the idea to do this?
Paul: It all fell together in place because Jennifer was just like, "I'm going to open a fish truck" and I'm like, "That sounds amazing! Let's do crawfish!"
Jen: And then we found the truck on Craigslist with the American flag already on it, so we were like, "This is it, we gotta make this thing happen."
Paul: And then I figured we should just put hydraulics on this thing and make it fold out and really just make it somewhere where you enjoy yourself and it's not just another street truck.

Why'd you choose this neighborhood?
Paul: Well we live in New York.
Jen: It's interesting in New York
Paul: Yeah, cause it's really interesting out of context.
Jen: It makes it so much more interesting for the cultural displacement type thing, where you're bringing this small little closet of America that most New Yorkers don't know about and it's what we grew up with. We thought placing it in the middle of New York City is really interesting.
Paul: And we're doing this for us too, this is like a lot of fun for us and it's not like a lot of projects we could have done together, which would have just been small businesses. I feel like we're really offering something to people, and they're really just eating it up and they love it. We get a lot out of it and they get a lot out of it. It's really turning into its own little experience. And Bushwick is a really exciting place. Bushwick specifically, we tried a lot of places trying to work around permits.

So you have to get new permits every week now?
Paul: We're in the process of getting our permit.
Jen: But right now we're just doing it week by week.

A serious question. Are you guys worried about what's going on in the Gulf and how it's affecting the seafood population?
Paul: We're definitely worried about what's going on in the gulf, but fortunately the crawfish and catfish are off fish farms, and they're freshwater, so it's not really affecting us. It's the same farmers, but these particular fish aren't in the gulf so that's good.
Jen: So we're worried about the farmers, 'cause it's the same guys. But no, it's not affecting us directly.

Are you interested in the Swedish style of crawfish boils?
Paul:I think we're just going to stay within the southern realm of the United States.

If you're eating a fried fish sandwich with mayo, you're probably not all that health conscious, at least for that day.
Jen: This is how we eat every day.

#crawfish boil
#fish fry
#interview
#jen-n-outlaw
Do you know the scoop? Send us a Tip