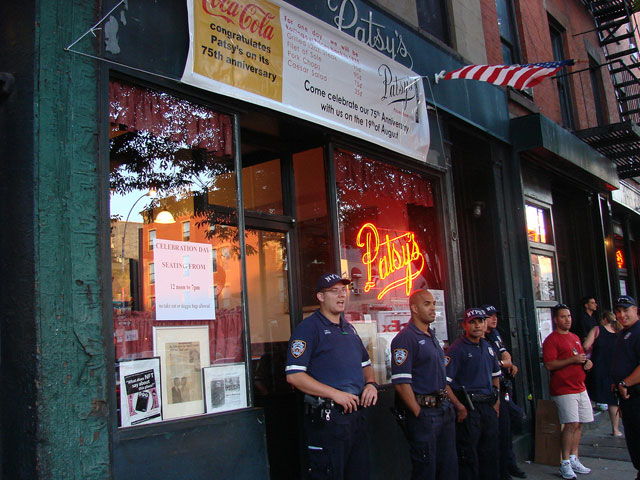 Pizza lovers and bargain hunters created a mob scene outside Patsy's Pizza 75th Anniversary yesterday, lining up for hours to take advantage of a one-day only rollback to 1933 prices. One could theoretically get a grilled 12 oz steak served with pasta marinara or vegetables for 90 cents, assuming one had the day off work and could wait on line for the better part of the day. So many showed up that the NYPD was summoned to set up barricades and corral the hungry roustabouts.

But a great many on line were finally turned away with nothing to show for their not-so-precious time, as Blondie and Brownie reports. Though Patsy's had promised the deal would be in effect until 10 p.m., at some point a Patsy's employee changed the signs to indicate a 7 p.m. cut-off. In the end, anyone who queued up after 3:30 p.m. was basically screwed, as one irate tipster tells Eater: "The police cut the line around 5 p.m. and said everyone on line at that point would be served... At 7, the police came out and said they were done serving. That it wasn't the owners fault, the chefs refused to cook past 7. And the chef's work for who exactly?"

That sure burns, but as is occasionally the case, a commenter puts the debacle in perspective: "Unless you are homeless you should not wait three hours for 60-CENT pizza. Congratulations on saving ten bucks! The only thing people should be understandably upset about is their own odd priorities."