Pastis, Balthazar Get Their Lawsuits Handed to Them on a Plate 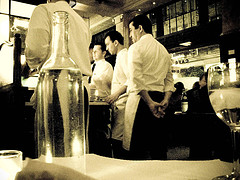 On Wednesday three former waiters filed suit against Keith McNally, owner of upscale eateries Pastis and Balthazar. The AP reports that the "restaurants had failed to pay minimum wage and overtime while letting non-tipped employees share in their tips."

Both restaurants are established, having opened in the late '90s, so the trio sought a class action which would allow them to include any workers who were employed by McNally over the past six years. It's expected that more than 100 people will be involved, including current workers who will be protected by anonymity.

It accused the restaurants and McNally of setting corporate-wide policies that caused workers to suffer financially, including a requirement that waiters repay the amount of a bill whenever a customer walked out without paying.

The restaurants also deducted money from a waiter's pay if his cash submitted at the end of a shift was short and took out another $5 per shift to cover the pay of the person who folds napkins on the tables, the lawsuit said.

Expensive eateries screwing over employees? Shocking. Maybe frequent patron of Balthazar, Nick Denton, can get them to institute some sort of newfangled pay system...but then McNally would likely end up waiting the tables himself.

#balthazar
#flickr
#keith mcnally
#lawsuit
#Nick Denton
#On Wednesday
#pastis
#The AP
#Wednesday
Do you know the scoop? Comment below or Send us a Tip