Outstanding 2015 newcomer Tuome has begun a passed dim sum program to add to their menu on the weekends. Some things you might see being whirled around the tables: dumplings in duck pho broth, oxtail croquettes, housemade beef pastrami, Uni Shu Mai and Tempura Shrimp with caviar and creme fraiche.

The Vegan Shop Up is back at Pine Box Rock Shop this Saturday, starting early at 11 a.m. and concluding at 4 p.m. During that time, gorge on vegan empanadas, doughnuts, pecan pie, pizza, macarons and more ready-made treats, plus stock up on vegan beauty products, spreads, cheeses, teas and more. The Rock Shop also has a crazy bloody mary selection, if that's your thing. 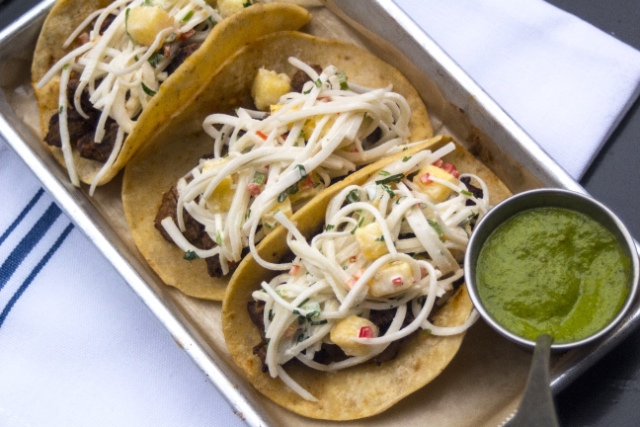 Saturday day drinking at The Garret East now includes the option of Otto's Tacos without having to leave the bar. Beginning this weekend, the Otto's team will be setting up a mobile taco stand serving up their signature corn tortillas stuffed with meats, veggies and their salsas from 1 p.m. to 5 p.m. The bar's also going to be mixing up two drink specials: Coconut Coffee Horchata and a Frozen Michelada.