There's a breeder rage outbreak on Yelp over the new Fornino in Park Slope. The pizza joint, which also has a restaurant in Williamsburg, just opened and the parents in the neighborhood are outraged that there's no children's menu.

FIPS points to some of the reviews, which make mention of $16 ravioli dishes—too high a price for some people to spend on their flesh and blood miracle of life, apparently.

Anyway, one parent declares, "I'm sure this place does awesome in hipster W'burg, but in breeder Park Slope, this menu has issues. There are no 'simple' menu items I could order since of course last night was the night my son decided to be picky. I wasn't looking for chicken fingers and french fries, but maybe a basic pasta I could order as an app would have worked." Say, like, a simple $8 pizza? But then again, you could buy a whole beer for that.

We called the restaurant earlier and an employee told us that they were working on a children's menu, which just moments ago was sent to us by their publicist (you can see it after the jump). Bitching on the internet: works every time. 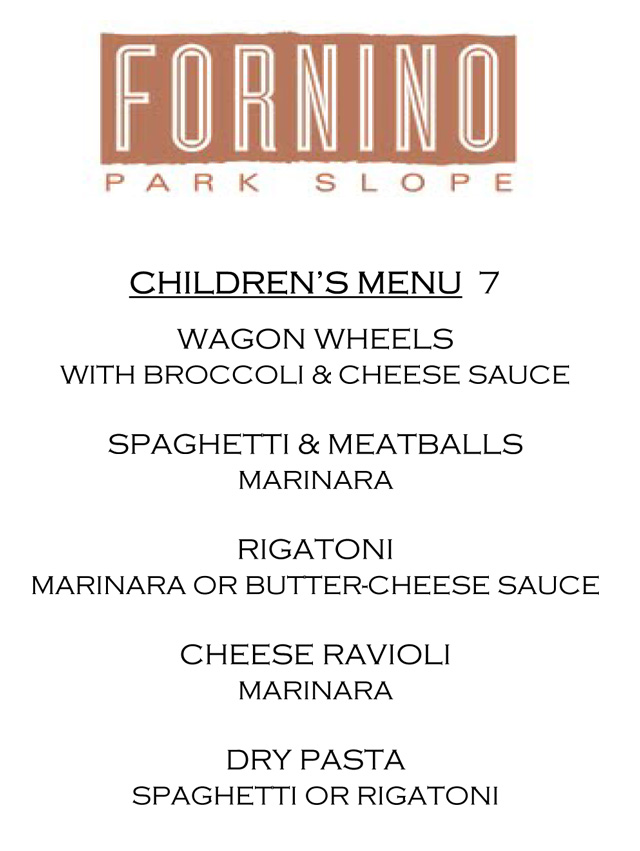 #breeders
#brooklyn
#fornino
#kids
#parents
#park slope
#yelp
Do you know the scoop? Comment below or Send us a Tip