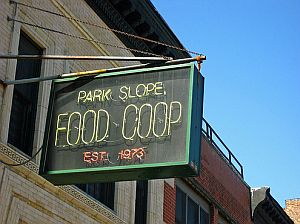 Members of the Park Slope Co-op are expected to vote to eliminate the sale of bottled water this spring. The proposal comes as the environmental costs of bottled water are being widely publicized, including a city advertising campaign encouraging people to forgo bottled water and drink from the tap.

American consumption of bottled water results in more than 22 billion discarded plastic bottles and enormous energy expenditures associated with shipping the water, which is so heavy that the 18 wheelers transporting it cannot be entirely filled.

Advocates of a bottle water ban at the Co-op point to the absurdity of shipping millions of bottles of water from such remote locations as Fiji when New York City is known for having some of the cleanest municipal water in the world. But some recent tests conducted on the city’s water supply may give them pause: minute traces of more than 15 pharmaceuticals have been found in the upstate watershed and closer to home.

If you haven't yet joined the bottled water backlash, like a growing number of New York restaurants, this in-depth article may change your mind about whether the convenience is worth the environmental toll. Here's a cogent examination of the bottled vs. tap debate from the National Resources Defense Council, and a look at what qualifies as bottled water.

#bottled
#contaminated
#drinking
#drugs
#Park Slope Co-op
#safe
#supply
#tap
#water
Do you know the scoop? Comment below or Send us a Tip