The latest in our Quick Bites series brings us back to Wylie Dufresne's roots.

THE VIBE
In 2013, New York City's modernist-cuisine hero Wylie Dufresne opened Alder in the East Village, a casual, drop-by counterpart to his influential (and expensive) wd-50 down on Clinton Street. Alder featured a "pub-grub" menu of beer cheese, pigs in the blanket and even a burger a little later on. But because Dufresne was at the helm, there was some culinary trickery involved. For example, the Pastrami on Rye that was a bowl of noodles.

Time passed, wd-50 closed (with much sadness and partying), and Dufresne—perhaps feeling restless in the kitchen—changed Alder's format last week from a la carte to a fixed, $65, five-course-plus-extras tasting menu. You can still get a handful of Alder classics at the bar (notably, that burger), but the dining room is all about the fancier new stuff.

Everything else about Alder is the same: the cool-looking dining area anchored by the salvaged wooden Grocery sign; the cheerfully professional staff; the grown-up atmosphere not usually found on this stretch of lower Second Avenue. 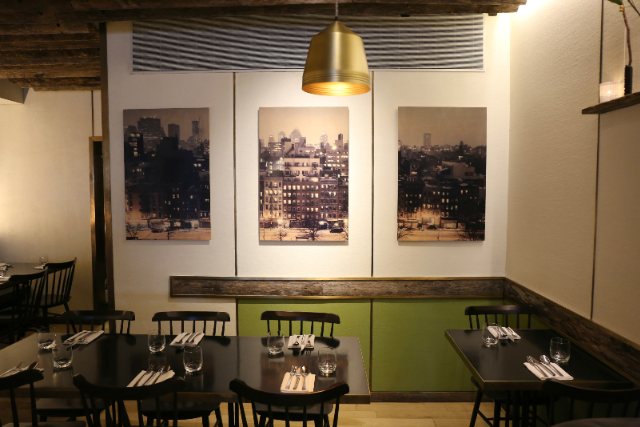 THE BITES
Did you like the Dufresne style at wd-50? Then you will likely enjoy the new Alder tasting menu. These are bold flavors, combining ingredients high and low, often presented in unexpected ways.

Take what is sure to become Alder's new signature dish: the Okonomiyaki Silver Dollars. Here, the Japanese street food staple is prepared like a stack of mini pancakes, with thinly sliced octopus and bonito flakes griddled in. The "syrup" is the dish's traditional sweet and acidic sauce, and the illusion is completed by a tiny pat of kewpie mayo melting on top. It looks cute; it tastes fantastic.

And then there's the Grilled Cheese amuse bouche, made up of a million (give or take) layers of Martin's potato bread and muenster, possibly gruyere cheeses, pressed into a gooey, inch-long "sandwich" and punctuated by with the world's smallest—but potent nonetheless—dollop of Tomatillo Soup.

Other dishes may be less visually clever, but it's all pretty excellent. The Scallops are perfectly cooked, nicely tender and sweet, sitting in a puddle of thick grape sauce and topped with coriander-brown butter that I guess has been dried and crumbled. The Lamb arrives in two bright-red-rare chunks, complemented by cubes of ramps panisse (which is like a fried chick-pea cake) and blobs of smoked yogurt.

The cheese course may have been my favorite, a "wedge" of Brie ice cream (it's as funky as you'd expect, and it's great) with intense pickled cherries, cashew bits, a smear of some sort of port reduction and, most brilliant, a sprinkling of crushed up Triscuits, which bring a terrific texture and a jolt of salt to the proceedings. 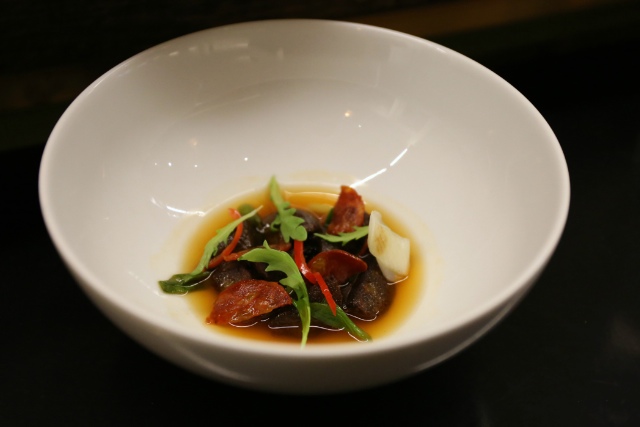 THE VERDICT
I once saw Dufresne walking on West Houston Street, hauling an awkward load that included some sort of chair, and when a tourist stopped him to ask for directions he did so easily, at length, and with a smile. Basically, he's an amiable, seemingly grounded guy, a native New Yorker for whom it's easy to root. The same goes for his restaurants.

The new Alder tasting menu is fun and interesting and delicious, but none of the portions are terribly large, and you'll spend a minimum of $85 (depending on what sort of tipper you are, and how much you drink) on a meal that lasts about an hour and—though satisfying—won't exactly leave you feeling stuffed.

Not to overly analyze things, but I think you have to be easily excited by food and appreciate creativity in the kitchen to really get the most out of the new Alder experience. 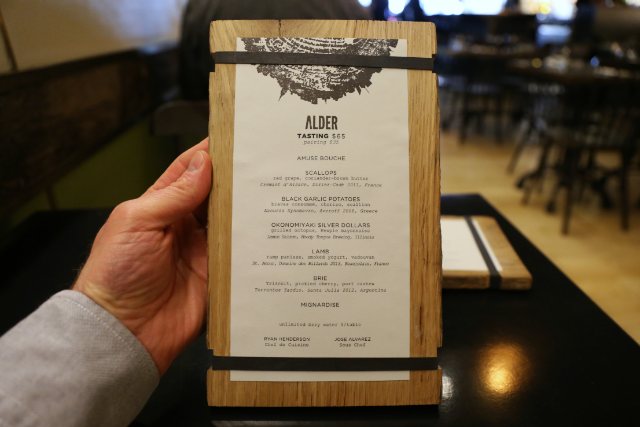 #alder
#quick bites
#tasting menu
#wylie dufresne
#original
Do you know the scoop? Comment below or Send us a Tip