If you'd ever dreamed of drinking cheap Polish beer inside a bar that resembles a Tudor-style mansion while metal blares out of the jukebox, you'd do well to hie thee to Greenpoint's Palace Cafe, because it's not going to be around much longer. The beloved Irish dive is closing on September 3rd, a notice on the door announces. DIAF 2016. 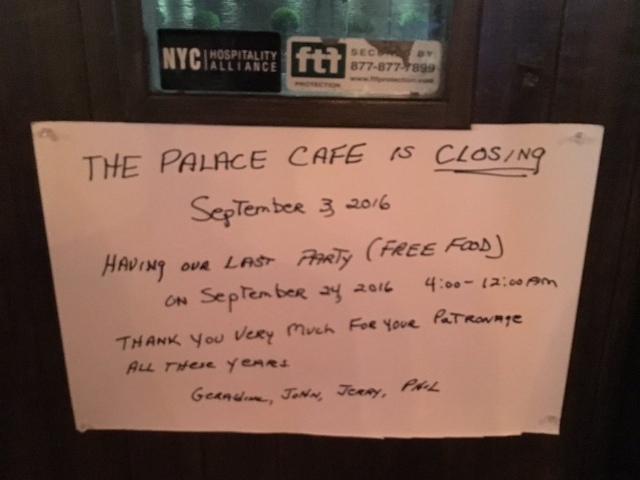 The bar began life in 1933 and has been owned by the same family since then. It's more of a dive in spirit than in cracked linoleum and stale beer odors, timeworn though many of the features may be. The horseshoe-shaped bar holds a stately court in the front room, bolstered by an enormous back bar wall that wouldn't have been out of place at Henry IIV's favored watering hole, had he had such a place in Greenpoint. The back room, once a grand dining space, now waits patiently for private parties and bands that will never again fill it.

The first time I visited Palace Cafe, an older woman was baking Irish soda bread in a small kitchen off the hallway. I figured she was prepping for a party or event, but instead she brought out baskets of the warm, sweet pastry with a bowl of aluminum-wrapped butter and invited everyone in the bar to eat. That small gesture, one that had likely been repeated over years and years, was one that will stick with me for the rest of my life.

We don't know why Palace Cafe is leaving us, only that it is. When I called this afternoon to ask what had happened, the man who answered the phone hung up on me. It seemed right.