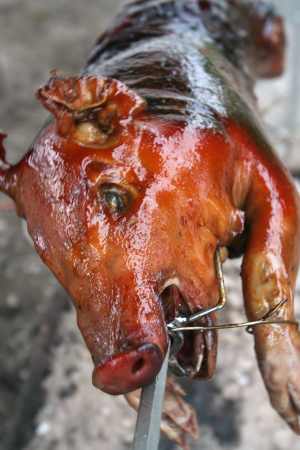 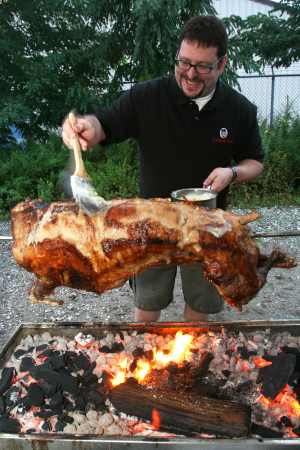 Despite Meatopia IV's downright pagan theme, Slaughter of the Innocents, which involved spit roasted kid goat and suckling pig as well as the consumption of copious amounts of other young animal flesh, the good lord chose to spare the soul of Mr. Cutlets, aka Josh Ozersky, and the band of meat-crazed revelers that came out Tuesday night to Water Taxi Beach to celebrate Josh's 40th birthday.

Meatopia has grown to be something of the social event of the season, as far as carnivores are concerned.To borrow a quote that was often used to describe the storied Jilly's, a favorite Sinatra haunt, Meatopia is where the elite meet to eat meat, and plenty of it. In addition to the spit-roasted pig (above) prepared by Seamus Mullen of Boqueria, and a baby goat, Scott Smith of R.U.B. prepared what's got to be one of the prettiest, and tastiest, little piggies we've ever seen. The pitmaster of the popular Chelsea restaurant also brought one of the evenings strangest and wonderful treats: bacon chocolate chip cookies. If you've a hankering to see some hardcore food porn, check out the video of the party at Grub Street.