Oyster fiends: prepare thy gullet for two bivalve extravaganzas this weekend, beginning with the Night of a Thousand Oysters at Chelsea's The Fillmore Room, where they're cooking (or not cooking) up oysters in a dozen different varieties for the next four weeks on days containing the letter "R." Seven oyster varieties will be available raw on the half shell between $1 and $3.50, cooked into an Oyster Mushroom Stew ($14), baked Casino-style ($15), and a multitude of other preparations. Make a reservation for evenings between 6 and 10 p.m. to enjoy the bivalve bounty.

Next: Grand Central Terminal's iconic Oyster Bar is hosting the 13th annual Grand Central Oyster Frenzy on Saturday, an all-day affair featuring sixteen oyster varietals from both coasts, a shucking competition, chef's demos, and a public slurping competition and beer shucking championship. The event takes place inside the restaurant from noon until 4 p.m. 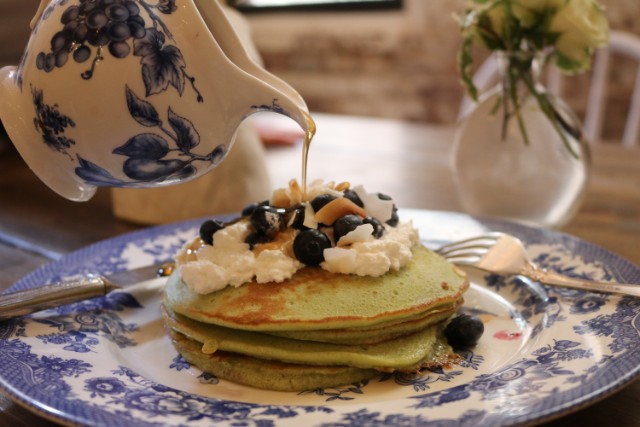 Adorable SoHo bakery and coffee shop Maman begins an ambitious brunch program this weekend that pairs their delectable baked goods and matcha lattes with more hearty egg, sandwich and pancake fare. The team also run nearby the Papa Poule rotisserie chicken spot and the succulent meat makes their Kale Caesar ($16) one of the best in the city; likewise an incredible honey-roasted pastrami makes Chicken Club ($13) more dynamic and lends lots of flavor to an Egg "Rabbit Hole" ($13). For the sweet tooth: Matcha Green Tea Pancakes ($14) with blueberries, ricotta and shredded coconut.

Our days of casually drinking beers and feasting on summer seafood are almost behind us, which is why an End of Summer Crab Boil sounds so enticing. On Sunday, superb craft brewery Threes Brewing will say farewell to the season with buckets of crabs and a beer for $35 in their large backyard, if weather holds out. They'll have "seatings" at 1 p.m., 3 p.m. and 5 p.m., with music from live honky tonk band Blue Steel. If crabs aren't your thing, Pies 'n' Thighs is popping up at the brewery until October 11th. Email tickets@threescrabboil.bpt.me to reserve a bucket with your name on it.