It's a bivalve bounty this weekend, with quite a few options for slurping some of the city's original Native New Yorkers. First up, the Grand Central Oyster Bar's annual Oyster Frenzy, where they'll be shucking 16 different varieties of oysters on Saturday from noon until 4 p.m. Now in its 12th year, the Frenzy boasts shucking competitions, a "Slurp Off" oyster eating contest and beer shucking to see who can uncap the most brews in the allotted time. The event is a la carte, with the restaurant's regular menu items also available to supplement the slippery critters.

Next up, Empire Oyster, where the briny bivalves will be treated to some heat by some NYC chefs who've teamed up with local oyster farms to "create unique oyster dishes highlighting the flavor and versatility of the oyster." Sample the oysters in raw form alongside each dish to truly understand the complex flavor profiles of each variety of oyster and what it brings to a composed plate. At the end, a winner will be crowned; along the way, lots of oysters plus drinks like sparkling wine from Long Island's Sparking Point and some oyster shucking demos for future DIY oyster parties. Tickets for the event run $75 and include three hours of tasting and sipping on Saturday from 4 p.m. to 7 p.m. 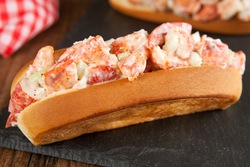 If lobsters and crabs are more your speed, check out the Hudson Hotel's Oktoberfest pop-up Craft & Claw, where chef Tien Ho will be whipping up seafood delights paired with some German bites and brews. On the menu: Sriracha Bahn Mi, Corn & Miso and Classic Lobster Roll and a Yuzo Mayo and Fennel Orange Crab Roll. Fish averse attendees can opt for a Bavarian Pretzel with Warm Beer-Cheese Sauce or avail themselves of the 12 local brews and the special custom Oktoberfest beer by KelSo Brewery. The pop-up begins on Saturday and runs through October 30th.

Finally, Staten Island's charming Alice Austen House hosts the Clear Comfort Clam & 'Cue on Sunday beginning at 2 p.m. Clams are just as delicious as their highfalutin counterparts like lobster and oysters and when prepared properly and are equally deserving of the status in the Half Shell Hall of Fame. The museum will be presenting oysters three ways, alongside baked potatoes and corn on the cob, plus more traditional backyard BBQ fare including burgers, hot dogs and grilled chicken. Tickets are $60 and include all the food, beers from Shaolin natives Flagship Brewery and gorgeous views of the Narrows and Verrazano Bridge.

#oysters
#weekend food roundup
#what to eat this weekend
#original
Do you know the scoop? Comment below or Send us a Tip
A new Gothamist is coming! We’ve moved comments over to our beta site. Click here to join the conversation and get a preview of our new website.