It has come to our attention that Nowadays, an enormous backyard bar that opened in Ridgewood last week replete with grassy hills, checkers, sangria, and grilled corn, isn't just built on our collective rural yearnings.

Located at 56-06 Cooper Avenue near the corner of Irving Avenue, on the Ridgewood-Bushwick boarder, it is also in close proximity to a Superfund site. 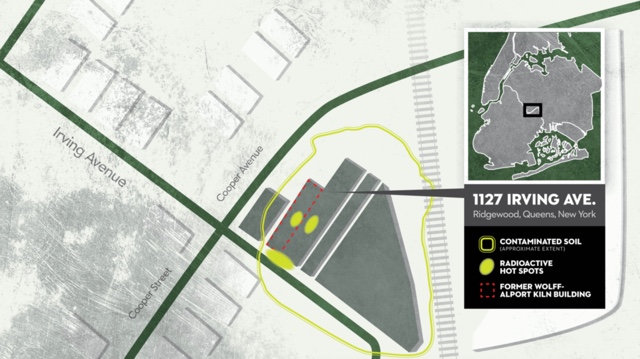 Between 1924 and 1950, the land adjacent to the sprawling bar was home to the Wolff-Alport Chemical Company, which had a thing for dumping radioactive thorium into the sewers. The EPA dubbed the Wolff-Alport plot a Superfund site last spring, right around the time the New Yorker called it The Most Radioactive Place in New York City, worthy of an interactive multimedia feature.

As Gawker (and our muckraking Gothamist commenters) have pointed out, Nowadays is only a few dozen feet away from the site's radioactive hotspots. However, while overexposure to thorium can cause liver damage and a rash of cancers, an EPA representative stated last spring that “there is no immediate threat to nearby residents, employees or customers."

But then there's this, from the EPA's report: "Thorium has been found at elevated levels in the deli basement [on the former Wolff-Alport plot], in air above the source material and outside the source boundary." This is alarming, not just for Nowadays patrons, but for those who attend the adjacent middle school and private daycare facility (both are within 900 feet of the site, which also contains offices, apartments, and auto shops.)

Justin Carter, who co-owns the bar with partner Eamon Harkin, told us this afternoon that he and Harkin spent the better part of 2014 settling the lease for 56-06 Cooper Ave. At some point last fall, a neighboring tenant told Carter that a building nearby, since demolished, had a history of producing radioactive materials. Just in case, she'd hired a private company to do some radioactivity tests on her property. According to Carter, he and Harkin immediately agreed to go in on the private testing. "We can assure you that all of the tests came up negative," he said.

However, Carter insists he wasn't aware of his proximity to a Superfund site until June 17th, the day before the bar opened. (A woman who had attended Nowaday's soft opening tipped him off via e-mail, seeking assurance that the bar was safe.)

Carter says he immediately emailed the EPA, requesting results from a joint radiological assessment conducted between July 29th and August 5th of 2013. In addition to official results, Carter received the following e-mail from the EPA:

While we do not have any sampling data from the 56-06 Cooper Ave. property itself [Nowadays], we do have data collected from the railroad spur adjacent to the building as well as from Cooper Ave. which show that gamma radiation levels are at or near normal background levels outside of the Superfund site itself. The 2013 assessment concluded that there is no off-site exposure from on-site radiological contaminants to the surrounding community.

As far as the EPA is concerned, bar patrons can drink without fear. This has proven to be enough assurance for Carter.

"We wouldn't have signed a lease and exposed our customers, our staff, and ourselves without... knowing that everything was safe and sound," he said. "We're a small business, started by three guys with no investors, and we're all here all the time. So are our families."