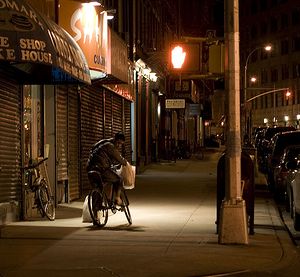 New York's called the city that never sleeps, but to many it’s also the city that never leaves its apartment. For the Netflix-and-sweatpants set, there are an increasing number of ways to get all the essentials with just a phone call or a few clicks of the mouse, provided you have a desirable zip code. The best known late night delivery service is Anytime, which provides East Village and Williamsburg shut-ins with the beer and cigarettes they need to make it through that Friday night Wii bowling marathon. But Anytime may be gone in no time, and their East Village phone number has been disconnected.

Max Delivery connects housebound shoppers in lower Manhattan with local stores selling everything from DVDs to booze. They operate between noon and midnight and promise delivery within the hour, though customers are limited to the hours of the store they’re ordering from. There is also Seamlessweb, which facilitates delivery from any restaurant within your delivery zone; a peculiar service considering the avalanche of menus constantly shoved under New York doorways.

And now along comes called Wakozi (Swahili for “one who delivers,” or “savior”). So far it’s a free service that connects Manhattan bingers to all the options for food, alcohol and tobacco (no firearms yet) that can be delivered in your area, usually in under half an hour. The website is pretty user-friendly, letting you peruse each store’s inventory and, in some cases, inspect an image of that bottle of ’77 Barros Almeida Colheita Port you’re about to charge to your credit card.

Delivery.com is another old standby for restaurant food, groceries, and liquor, but none of these services seem capable of getting you hard liquor when the party runs dry at midnight. And areas outside of downtown Manhattan and trendy Brooklyn are still criminally underserved – what are outer borough residents supposed to do, get dressed and leave their apartments?