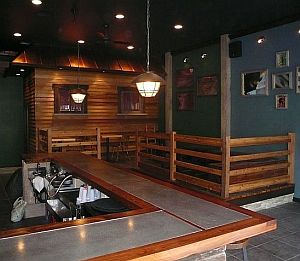 The Habitat: This charmingly designed bar and restaurant we reported on a few weeks ago opens tonight. Built almost entirely out of salvaged lumber, The Habitat has achieved a rustic back porch ambiance by building an actual porch next to a wall dressed up with exterior siding and fake windows. Chef Ashley Engmann's small plate menu has empanadas, a pecan mandarin salad, cheeseburgers, and other sandwiches. 12 New York microbrews are on tap. 988 Manhattan Avenue, between India and Huron, Greenpoint, Brooklyn, (718) 383-5615.

A Casa Fox: Tonight Melissa Fox, who’s been running a successful catering company that specializes in Latin themed parties, opens up her first restaurant in the East Village. Originally from New York, Fox spent ten years working in Hollywood before “throwing up my hands in disgust” and moving back to New York – on September 11th, 2001. A Casa Fox will offer a laid-back lunch and a more high-tone dinner, with a modern spin on the traditional Latin cooking she learned from her Nicaraguan mother. Braised pork ribs, fried plantains and pulled beef abound, but her specialty is baked empanadas, which include portabella and smoked gouda, as well as pork with caramelized onion. BYOB for now. 173 Orchard St, (212) 253-1900.

Bar Milano: The hype-meter’s at 11 for the Denton brothers’ (’ino and ’inoteca) third collaboration, a Northern Italian restaurant-bar near Gramercy Park. Eater snapped photos of the new venture, which opened today at 7 a.m. and will serve breakfast (with free Wi-Fi until noon), lunch and dinner. The space is sleek and swank, with marble walls and wine cabinets swollen with over 500 varietals. Do you sense this isn’t a place for budget conscious? Specialty cocktails break the $13 mark, an on-site pastry chef makes all the bread and desserts, and if you need to ask how much the Capasente con Caviale costs, you probably can’t afford it. Thrillist has the menus for your perusal. 323 Third Avenue, (212) 683-3035.

#A Casa Fox
#bar
#Bar Milano
#greenpoint
#new
#opening
#restaurant
#review
#The Habitat
#village
Do you know the scoop? Comment below or Send us a Tip