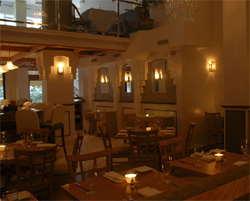 Prespa: This new bi-level restaurant and lounge is named after two freshwater lakes in southeast Europe shared by Greece, Albania, and the Republic of Macedonia. It's a redesign of what was formerly Prespa Mediterranean Brasserie, and Strong Buzz says Murray Hill gourmands are fervently hoping it'll become a local dining oasis in their mediocre neighborhood. The menu from Executive Chef Richard Farnabe (Jean-Georges, Montrachet) emphasizes Mediterranean tapas, but there are also full size entrees such as Braised Short Ribs with pine nuts, apricot and carrot fritters ($12/$27); Paupiette of John Dory with foie gras, chanterelle and yellow wine sauce ($17); and Broiled Black Cod with jicama and avocado salad ($11/$28). (Officially opening Monday for lunch and dinner.) 184 Lexington Avenue, between 31st and 32nd Street; (212) 810-4335

Perle: Hunkered down in the Financial District, this new French brasserie isn't exactly opening at the optimum time. Owner Mario Carta tells the Post, "When I say to people that I’m opening in the Wall Street area they all look at me and say, ‘You’re not scared?’ It’s never the right moment, it’s the never wrong moment, we’re just going to have to adapt our concept to the economy." To that end, he's modifying the space to feature a separate takeout area. But investors who haven't yet lost their shirts can still sit down at lunch for the quiche Lorraine, the croque monsieur, or the salade niçoise. According to NY Mag, chef Franck Hiorholzer's dinner menu "plays it straight with everything from escargot to boeuf bourguignon, to say nothing of steak frites." 62 Pearl Street, (212) 248-4848

The John Dory: This is the hotly anticipated collaboration between Ken Friedman and Spotted Pig chef April Bloomfield. Named for a species of fish, the emphasis here is obviously seafood, highlighted by the Chelsea restaurant's massive fish tank and other marine affectations. The menu changes somewhat according to what's fresh and is updated on their blog. Highlights last week included Grilled Octopus with fennel, celery and bottarga; and Oyster Pan Roast with uni butter crostini. 85 10th Avenue (between 15th and 16th Streets), (212) 929-4948.