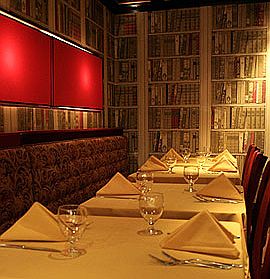 Padre Figlio: In Italian, the name means father and son, so it’s no surprise that this new Italian steakhouse is run by Mario and Antonio Cerra, the father and son team behind Da Antonio. After ten years, they’ve sold that establishment and are joining forces again to focus on high-end Italian meats, such as rib eye and a porterhouse of Piemontese beef for two.

Exotic meats include New Zealand venison, buffalo, ostrich and boar. There’s plenty of pasta options for the meat-averse; and if you like seafood, the Homemade Lobster Agnolotti might strike your fancy. The interior of Padre Figlio is lushly appointed with red velvet walls and chandeliers made from cast-iron roosters. [Photo via Thrillist, who’s got the menu.] Opens Monday. 310 E 44th St. (212) 286-4310.

Sakae Sushi: The Singapore-based sushi chain is very big in Japan; tonight Americans will get a taste when their first outpost opens in the Chrysler Building. Half the fun is how your sushi gets to you, via a conveyor belt that circulates sushi through the restaurant. Who’ll be the first American to rest their head on the belt and open wide for a non-stop sushi train? Our advice is to skip the tuna. And if you want hot food, the future has arrived via one of those new-fangled digital menus that lets you place your order electronically. 405 Lexington Ave. (212) 286-8868

Persephone: For two decades, Nicola Kotsoni and Steve Tzolis have been adored for their Mediterranean restaurant Periyali, which brought back regulars for the phyllo-wrapped salmon and grilled octopus. Their second venture, Persephone, continues uptown in the space vacated by defunct Greek restaurant Retsina. An extensive Greek wine list and ouzo cocktails compliment a proudly greek array of entrees and appetizers. There are Greek meatballs in tomato sauce and yogurt as well as a grilled souvlaki made with filet mignon and octopus legs, marinated in wine. The early buzz on the place, which just opened, makes another two decades of great Greek food seem likely. 115 E. 60th St. (212) 339-8363.

#chrysler building
#italian
#japan
#lexington ave
#new restaurants
#new york
#new zealand
#opening
#Padre Figlio
#Persephone
#sakae sushi
#sushi
#the future
Do you know the scoop? Comment below or Send us a Tip
A new Gothamist is coming! We’ve moved comments over to our beta site. Click here to join the conversation and get a preview of our new website.