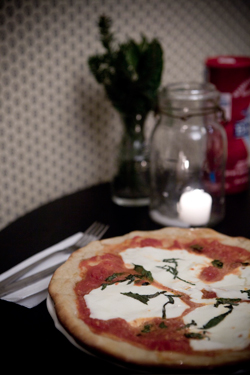 Ortine: Clinton Hill's Sarah Peck belongs to the Park Slope Food Co-op, grows herbs on her deck, composts, and, we're told, "is on a mission to eliminate plastics from her life." So that should give you some idea of what to expect from Ortine, her new Prospect Heights cafe, which features such embellishments as a row of handmade schoolhouse globes, antique tables, and a Danish modern chandelier. Peck runs the place with her husband, a practitioner of traditional Chinese medicine who'll pushing home-brewed Kombucha and "an unusual variety" of teas. Open from 7:30 in the morning to as late as 11 on some nights, Ortine's menu ranges from belgian waffles and housemade pastries in the morning to lasagna and pizza (pictured) later in the day. Naturally, "all pickling, preserving, sprouting and baking will be done in-house." Also, free Wi-Fi. 622 Washington Avenue (between Pacific Street & Dean Street), (718) 622-0026
Caracas Arepa Brooklyn: This is the first Brooklyn outpost of the East Village Venezuelan hotspot, where big crowds cram into two tiny spaces to get some delicious arepas in their bellies. (If you're not among the addicted yet, arepas are warm cornmeal patties made to order with all sorts of fillings like eggplant, avocado, beef, cheese, etc.) Owners Maribel Araujo and Aristides Barrios tell the Brooklyn Paper that “arepas are something you can eat every single day — they’re our bread in Venezuela.” The Feed Bag has photos and a preliminary review of the new location, which has a full bar and can seat 75: "The restaurant was packed a mere four days after opening. Aside from two new menu items and coffee from nearby Oslo, the menu is pretty much the same. The biggest difference? The owners are seeking a full liquor license from Williamsburg’s notoriously generous community board and hope to specialize in rum (for now, however, its blissfully BYOB)." 291 Grand Street, between Roebling and Havemeyer streets, (212) 529-2314

Atomic Wings Harlem: Oh yeah, it's on, people. Hot on the heels of their new location in Park Slope, Harlem residents are getting their mouths set ablaze by what many deem the best wings in town. And it's not just about the wings, either; they're doing soups, salads, burgers and even healthy wraps. But, really, it is pretty much about the wings, which "sane" diners can order in degrees of spiciness ranging from mild to medium to hot, and "insane" wing freaks can order "abusive, nuclear, or suicidal." If your number's up, death by wing isn't so bad, really. Oh, and this location is more upscale than your average wing joint; they've got big flatscreen TVs, internet access, and a cushy lounge area, all of which makes this, we're told, "the most well-appointed Atomic Wings to date." Your move, Jersey City. 2090 Frederick Douglass Blvd, (212) 222-8850