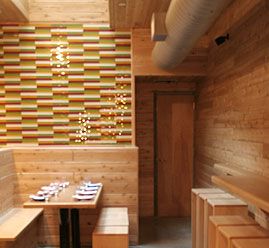 Mercadito Cantina: This is newest advance in the expanding Mercadito empire; besides the original Alphabet City Mercadito there’s also Mercadito Grove. This one is not far from the original, on Avenue B, and packs a lot of Mexican fixings into a dainty space that stays open ‘til 1 a.m. The main action here is at the make your own taco bar, where heavy rollers can choose from eight guacamoles and ten salsas, all made from organic and locally sourced ingredients. Most of the meat – which includes organic chicken, grass-fed beef, and Berkshire pork – is wrapped in maguey leaves before they're baked. For libations, try the 'Tric-quila', a sake-based tequila substitute. Photo via Thrillist, who has the menu. 172 Ave B, (212) 388-1750.

Eton: Chef Eton Chan is a long way from his previous kitchen at Asiate in the Mandarin Oriental Hotel in Columbus Circle. (He also did time at the now-defunct Café Gray.) Chan’s new ten-seat handmade dumpling house has just opened in Carroll Gardens, but he’s tipping his hat to the old neighborhood by also serving Italian shaved ice, with toppings like fruit cocktail, mochi and red azuke beans. $3.50 gets you 5 dumplings, letting the locals save their money for stuff like rent. 205 Sackett Street, Carroll Gardens, Brooklyn.

The General Greene: This new Fort Greene restaurant has taken over the space formerly occupied by June. Named for General Nathanael Greene, the menu promises “high-quality American comfort foods” like roasted pork ribs with tomato chutney. According to Grub Street, pastry chef Nick Morgenstern is one of the best in town, so keep focused on dessert. And of course, there are the requisite “classic-minded cocktails,” such as the General Gin Cup, infused with cucumber and mint. 229 DeKalb Avenue, Fort Greene, Brooklyn; 718-222-1510.