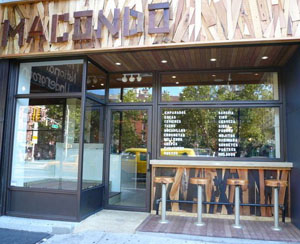 Macondo: Named after the fictional Colombian village in Gabriel García Márquez’s One Hundred Years of Solitude, this new Lower East Side restaurant gives Latin street food a gourmet twist. We stopped in for dinner Thursday night, and though they're still working out the kinks (the frozen drinks took forever, and some of the staff had no idea what they were setting down on the table) it's worth a trip for the cod fish Arepa alone. The fresh tropical fruit cocktails are quite refreshing; the frozen Avocado and Mezcal cocktail was a winner, and the Açaí and Pomegranate Rum, a sort of Brazilian tropical mojito, was almost irresistible. We'll be back for you, little mojito! 157 East Houston Street, (212) 473-9900.

Socarrat Paella Bar: Designed by the same guys who brought you Allen & Delancey, this new Spanish restaurant is not for the anti-social: Besides four bar seats, the dining happens at a long, 20-seat communal table where everyone is expected to relax and mingle. Which shouldn't be a problem if you like pan-fried Spanish fare; chef Felipe Camarillo's menu revolves around paella (the place is named for the crust that forms on the bottom of a paella pan) and fideuas, which substitute Spanish noodles for rice. 259 West 19th Street, (212) 462-1000.

The Frying Pan: After a long, splitting bureaucratic headache, the famous summer party boat is back in action, just a little further north at Pier 66. The bad news is that the festivities will now be cut off at 1 a.m.; the good news is that, per Grub Street, the beloved Hudson River hangout is now rigged with "a fancier covered bar area, some new antique bar stools, a central fountain, and Ping-Pong and Foosball tables." The menu includes such delights as crab cake with avocado, steamed littleneck clams, garlic fries, pizza, BBQ Saint Louis spare ribs, steamed live Main lobster, and even a Hebrew National hot dog. If you will it, it is no dream.