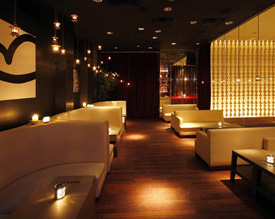 "M" by Megu: Expensive Tribeca Japanese restaurant Megu has redone its upstairs space (formerly Kimono Bar) into a swank nightclub (pictured) with a "small bites" menu. The dance floor has been expanded, fancy cocktails like “Death in the Afternoon” (Absinthe, Champagne, Rock Sugar) have been concocted, and the waitress have been attired in swimsuits custom designed by Keiko, who we're told is kind of a big deal. Menu options include Kobe Beef Sliders, Crispy Cod Sliders, Crunchy Rice Cake Poppers, and select items off the downstairs Megu menu. Your reaction to the following will probably determine if any of this will appeal to you: Eve attended the opening party! 62 Thomas Street, (212) 964-7777

Opus: This new Italian bar/restaurant/pizzeria/gelatoria is good news for Upper East Siders with an aversion to gluten. Chef Giuseppe Lentini (known for Tini's, another UES Italian place) emphasizes gluten-free cooking with an expansive menu spanning the boot from top to toe. The press release declares that all allergic diners, not just trendy glutens, are welcome because Lentini makes each dish to order. So maybe there's an untapped market of Upper East Siders with food allergies? The 70 seat restaurant, which features art by Federico Castelluccio (Furio on The Sopranos) also hopes to cash in on hungry insomniacs by keeping the kitchen open until 5 a.m. For dessert: house-made sorbets, gelati and dairy free frozen treats by the scoop or quart. 1574 Second Avenue near 82nd Street, (212) 772-2220 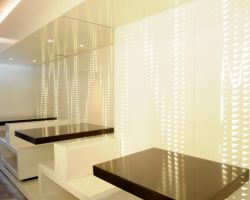