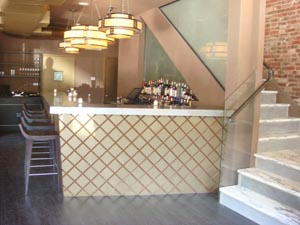 The Hill: This one's named for the widely derided fratastic neighborhood of Murray Hill, which the upscale sports bar calls home in the space formerly occupied by The Dip. You've got two levels and thirty screens of sports to choose from while you dine on such exotic delicacies and mozzarella sticks and hamburgers. In its defense, Thrillist points out that the beer selection does rise slightly above the prosaic with "specific brands drank by collegiate fans when celebrating their team." High fives and terrorist fist jabs all around. 416 3rd Avenue, (212) 481-1712

The Libertine: For those craving something more pretentious, there's the Libertine, also opening Monday in the boutique luxury hotel Gild Hall in the financial district. It's a swank lounge that affects an old money gentleman's club vibe with book-lined walls, a horse-and-carriage-themed mural, and a spiral staircase that leads to a cozy room with leather banquettes, vintage globes, and a ten-person communal table. Urban Daddy has more on the matter and recommends items from the small plates menu such as Sturgeon Caviar Sliders and the Kobe Franks ‘n Jackets. 15 Gold St (at Platt), 212-232-7700