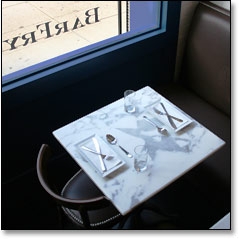 BarFry: Sumile's Josh DeChellis is bringing New York our first ever tempura bar. Not only will he be perfectly battering and frying fresh veggies, seafood, and meat and serving them up with his signature dipping sauces (wasabi remoulade and pickled jalapeno soy, to name a few), but he'll be offering made-to-order tempura Po Boys. Wash everything down with Gaijin Pale Ale from Oregon's Rogue Brewery, made especially for BarFry. And -- they deliver in the neighborhood. West Village, better buy some elastic-waist pants. 50 Carmine between Bedford and Bleecker Streets, 212-929-5050.

Rickshaw Dumpling Bar: The newest outpost of Kenny Lao and chef Anita Lo's shrine to dumplings opens in Greenwich Village. Like its Chelsea cousin, it offers six types of dumplings, each with its own perfectly matched dipping sauce. Unlike its Chelsea cousin, this location will have a coin-operated photo booth. 50 E 8th St between Broadway and Mercer Street, 212-461-1750.