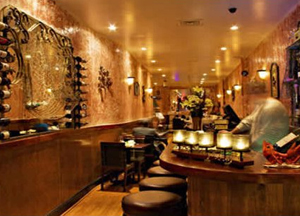 Dardanel: Salt crusted fish is the star of the reasonably priced seafood menu at this new midtown east restaurant (pictured), named for the strait that connects the Black Sea to the Mediterranean. As such, the high number of seafood dishes are complemented by Turkish classics like halvah pie. The fish is imported daily from the Mediterranean, and entrees include Brook Trout Casserole with grilled vegetables ($19); brick oven baked Black Sea anchovies with rice, pine nuts, currant and herbs stuffing served in a casserole ($19); and Char Grilled & Skewered Chicken or Lamb Adana ($16). Wines come from as far afield as Israel and Georgia, and the $5 desserts include Almond Macaroons and Baklava. Dardanel seats 65, and is "nautically themed." 1071 First Avenue, (212) 888-0809

Draft Barn:Gowanus Lounge has the scoop and photos on this new beer mecca in South Slope. It's the sister bar of another Draft Barn in Bay Ridge, and rumor has it the place features 200 different kinds of beer to chose from. A tipster writes: "It’s great. Nice, oak interior with a general ‘draft haus’ style. They also have food (which isn’t blowing the doors off anything) and the owner told us he’d be opening for brunch soon." 3rd Avenue between 12th & 13th Streets

Boqueria Soho: This is the new Soho location of the beloved Chelsea tapas joint, named for the food market in Barcelona. And fans of the original will be glad to find a whole lot more elbow room here—plus WiFi for the antisocial! But the real highlight of the 2,300-square foot space is the open kitchen, which is surrounded by a 12-seat chef’s counter available for walk-ins only. We checked it out opening night and have kudos for the salt cod and grilled octopus delicacies served up by executive chef Seamus Mullen. Another crowd-pleaser was the Cojonudo (bite-sized toast point with house-made chorizo and a sunny-side up quail egg). For lunch, try the selection of Bocatas (Spanish sandwiches), which include Bocata Jamon de Pato (house-made duck ham with fig jam and king oyster mushrooms). 171 Spring Street, (212) 343-4255

Also too: Check out our photo spreads on newcomers 10 Downing and Elsa, which is where Hanger Bar used to be, sniff. But at least the new place has a sewing machine turned into a beer tap!