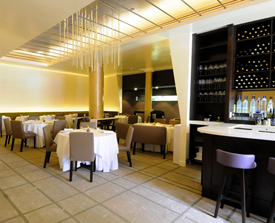 Corton: One of the most anticipated openings of the season, this modern French restaurant, formerly Montrachet, is the love child of big shot restaurateur Drew Nieporent (Nobu) and chef Paul Liebrandt, who dreams of owning a cryogenic freezer "for freezing the cooks when they misbehave." Located in Tribeca, the 65-seat space serves a three-course prix fixe for $76 and a tasting menu for $110. What financial crisis? Appealing options for the not-broke-yet include Ocean Trout Ballotine (White Sturgeon Caviar, Konbu Consommé) and Scallops (Uni Crème, Radish, Marcona Almond). 239 West Broadway, (212) 219-2777

Ella: The interior decorator who did Joan Crawford's homes and the Waldorf Towers has, we're told, "proudly lent his flair and vision" to his nephew Josh Boyd's new venture on Avenue A. Boyd says the bi-level music lounge is his homage to "Hollywood glamour and the roaring 20's," but Grub Street has had fun calling it a "Speakcheesy." Urban Daddy, on the other hand, gushes over the subterranean "circus-style music parlor, complete with a big top domed ceiling, red-curtain wallpaper and a tiny little stage just inches off the ground." Bar snacks and de rigueur old-timey cocktails ($12) abound. 9 Avenue A (between Houston and 2nd St), (212) 777-2230.

Walter Foods: From Balthazar bartender Danny Minch and Barrio Chino owner Dylan Dodd, this cute new Williamsburg restaurant is big on seafood. There's a full raw bar, three daily oyster picks, and lobster in no less than five of the dishes. Brooklyn Based is heartily endorsing the blackened shrimp, warm beet salad, and pork chops with apple and shallot compote. And Minch, not one for false modesty, declares his French dip to be the best in New York City. 253 Grand Street, Williamsburg, (718) 387-8783.