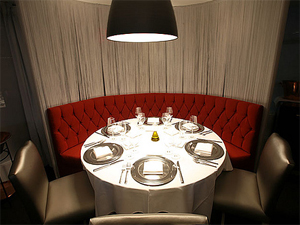 Convivio: The Tudor City restaurant formerly known as L’Impero has been reborn as Convivio (pictured), a more casual but still swish venture from the same team, Chris Cannon and chef Michael White. Located in a historic 1920s building, the space is made deluxe with burnt orange banquettes, a hand-hammered copper bar top, and reflective lacquered ceilings. White – who spent seven years studying Italian cuisine in Imola – emphasizes the southern part of the boot on his menu. Standouts include Maccheroni (handmade pasta twists with red shrimp and pesto cetarese) and Malloredous (Sardinian saffron gnocchetti, crab and sea urchin). The wine list also hews toward Southern Italy with over 550 bottles, and there’s an exclusively Italian beer list as well. 45 Tudor City Place, (212) 599-5045.

Sweet Revenge: This Carmine Street treat shop is not just another West Village cupcake bar, owner Marlo Scott tells Cupcakes Take the Cake: “I wanted to create the feel of a world bistro. I wanted to get away from the cutesy cupcake bakeries.” To that end, during lunch and dinner Sweet Revenge features non-cupcake options like a cheese plate and salads, among other edibles, with a selection of beer and wine to wash them down. But let’s face it, it’s about the cupcakes here, which thus far include raspberry red velvet, peanut butter, vanilla/vanilla, and Mayan chocolate. 62 Carmine Street, (212) 242-2240.

Delicatessen: Opening last night in SoHo, this snazzy new restaurant/lounge from the owners of Cafeteria had a soft-opening Thursday with an Interview Magazine party. Grub Street reports: “There’s not much new about the sleek surfaces, backlit back bar, and the cabinlike (odoriferous!) wood panels upstairs, but we were wowed by the square, eight-table room downstairs, where there’s a D.J. booth, a wall mural by José Heredia, and a sunroof offering a view of the tenement buildings above.” Chef Doron Wong’s cosmopolitan comfort food menu ranges from a breakfsast-time Delicatessen Benedict, made with pastrami and spicy spinach hollandaise sauce, to Matzoh Ball Chicken Soup and Cheeseburger Spring Rolls for dinner. 54 Prince Street, (212) 226-0211.