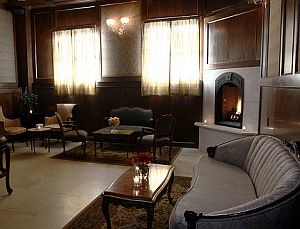 Clover Club: This new Cobble Hill lounge has no connection to this Clover Club “located in beautifull [sic] Mark, Illinois,” so leave your green face paint at home. The atmosphere here, as evinced by the photo, is old world charm and sophistication, hearkening back to an era when men dueled with pistols, not text messages, and the curse of the Cosmo had not yet darkened New York. Small plates include oysters on the half shell, steak tar-tar, and molasses and cumin rubbed chicken drumettes with roquefort fondue. Though the focus is all about "the craft of The Cocktail," owner Julie Reiner stresses that her fastidious drink selection isn't about pretension but inclusion: "Our goal is to demystify the secret world of fizzes, sours, daisies and punches in the hopes that everyone has a good time at Clover Club and learns a little something along the way." Drinking and learning; we'll not rest until we master that art. 210 Smith Street, (718) 855-7939.

Sakae Sushi: It’s been less than six months since this Singapore-based sushi chain opened up their first New York City restaurant in the Chrysler building, where the sushi comes on conveyor belts and you can order from a touch screen menu. Now they’re expanding with a second Manhattan location in Greenwich Village. Reckless hubris or visionary acumen? You be the judge; the 70-seat restaurant features a 61-foot conveyor belt from the kitchen to the booths, interactive digital menu, and each table has self-serve water taps for complimentary green tea refills. The post-server age is upon us! 135 West 3rd Street, (877) 725-2387

Forge: If chef Marc Forgione’s new Tribeca restaurant tastes half as good as it looks, we’ll order seconds in advance. The interior is distinguished by gorgeous reclaimed wood from Massachusetts sawmills, black leather banquettes coupled with custom-made butcher block tables, floor-to-ceiling windows that open onto the tree-lined street, and glass lanterns suspended throughout the restaurant by elevator cables. Fresh bread comes from the circa-1906 cast iron oven in the dining room, and behind the bar is an exposed elevator shaft, pulley still intact, which now functions as a stairway leading down to a not-yet-open 40-seat private dining area. What else? Oh, the food. Well, that remains to be seen, of course, but considering Marc’s famous father, chef Larry Forgione, one expects good things from his son’s seasonal American menu. 134 Reade Street, (212) 941-9401.