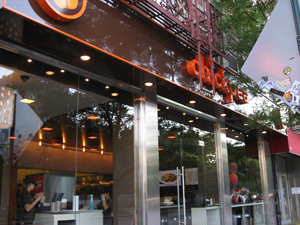 Chickpea: We used to love Chickpea, that fresh falafel place on Third Avenue and St. Mark’s Place that let you squirt as much tahini as you wanted into your pita. But we lost interest when they went through that whole confusing name change contest – marred by allegations that the game was rigged – and ended up calling themselves Kosher Village. Now it’s Tahini, and they bake their falafel, which is as about healthy as it is unappetizing.

Nevertheless, the owners have opened up a shiny new location on East Houston, which, as Broadway Boogie notes, is “adjacent to an old-school Western Union/Check Ca$hing storefront. A clash of the seedy and upscale, the site is a familiar social conundrum that is so typical these days.” Corner of East Houston and Eldridge.

1 Dominick: Now along comes Jimmy Carbone, who’s uncorking the bottled lightning that made his hole-in-the-wall Jimmy's No. 43 such a hit with a new venture in south Soho. The Italian café is part of the newly renovated HERE Arts Center, which used to have a funky little coffee shop in the lobby. Now it’s a bit more upscale, though still full of character. Small plates, Italian microbrews and wine (liquor license pending) will be served morning to night, but Thrillist declares that “the real deal's dinner: a collection of warm and cold share plates like Alici (marinated white anchovies, celery heart, black olives, pine nuts), Anguria (watermelon, ricotta salta, cherry tomato, mint, olive oil), and Fried Bologna Tramezzino.” For dessert, how does baked Joey’s dairy ricotta, with orange blossom honey and pinenuts sound? 1 Dominick Street, between Varick and 6th Avenue, (212) 647-0202 x308.

Ellis Bar:The Village Voice’s Sarah DiGregorio has potentially good news for the Windsor Terrace crowd. The space vacated by Aaron’s Department Store has finally been filled by Ellis Bar, which has a pool table, darts, and a menu that features dishes like four bean chili with Navajo fry bread, cornmeal crusted catfish, zucchini cakes with corn salsa. DiGregorio poked her head in and reports “nothing high-concept going on design-wise, just a long, dark wood bar and a second room with a bunch of wooden chairs and tables.” Still, it's got $5 Bacardi going for it. 627 5th Avenue at 17th Street, (718) 768-0532.