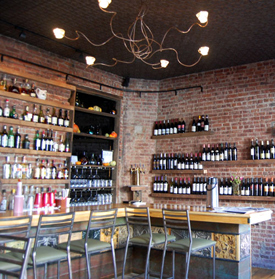 The Chestnut Bar: Carroll Gardens neighborhood restaurant Chestnut has expanded into the space next door with a “cozy, rustic bar.” We're told it’s got exposed brick, tin ceilings, a U-shaped bar, tall snack tables made of recycled Chestnut, and a collection of antique "chestnuts" (bottles like these, from which the restaurant got its original name). Chef and co-owner Daniel Eardley is all about the farm-to-table, sustainable agriculture thing, and his $30 three-course prix fixe menu (served Tuesdays and Wednesdays) will be available in the new bar space. There’s also a separate small plates menu for the bar only, which includes such items as Sardines on Toast with Niagra Falls grapes and cured olives, and Long Island Rabbit wrapped in smoked bacon, fresh ricotta, and swiss chard. 271 Smith Street, (718) 243-0049.

Pranna: Long Island restaurateurs Rajiv and Payal Sharma (The Maine Maid Inn, Sitar) have rolled the dice on Manhattan with this capacious, 15,000 foot upscale Southeast Asian restaurant and lounge. The press release tells us that chef Chai Trivedi’s menu, which emphasizes Thailand, Laos, Cambodia, Vietnam and India, is inspired by his travels throughout Southern Asia on a Honda Nighthawk 750 motorcycle. There's also an entire menu devoted to Satay, the classic street food of grilled meat served on a stick. The cocktails are “fruit forward,” the wine list is compiled “from environmentally responsible vineyards,” and the multilevel space looks quite fetching (as photos on Eater reveal). So here's a potential pick-up line: Hi, I read on Gothamist that this space was designed on the principles of Vastu—a Hindu tenet much like feng shui. 79 Madison Avenue at 28th Street, (212) 696-5700.

Via dei Mille: There’s a typically baroque description of this Italian Soho newcomer on Thrillist, but, in lieu of a press release, this is what we’ve been able to parse: It’s casual yet fancy, the bar is made of marble, and the chef “credits all his skill to years (and years) of cookin' with grams.” Here’s the menu, which promises to reinvent old warhorses like lamb chops with lamb shoulder. This being Soho, we’re betting the real attraction here will be the attractive diners admiring each others' well-toned attractiveness. Or as one Citysearch commenter/shiller put it: "Via dei mille is going to be a great place for chick people to have fun in Soho,perfect music italian food and the GIRLS!!!!!!!!!!!!!!!" 357 West Broadway, between Broome and Grand; 212.431.0080.