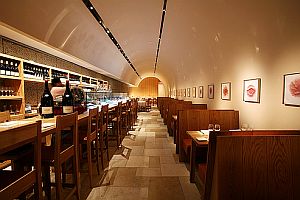 Bar Boulud: Times restaurant critic Frank Bruni recently lost his patience waiting on hold for 15 minutes to make a reservation, which should give you some sense of how feverish the excitement is for Daniel Boulud’s latest foray. The tony uptown wine bar, across the street from Lincoln Center, enjoyed the raging buzz of a sneak-preview opening on New Year’s Eve and now the 100 seat restaurant is open for real. Judging from the photos, the modern yet warm interior does look inviting; a long vaulted ceiling is intended to “invoke a classic wine cellar”, a backlit gravel wall echoes an old world vineyard, and three private “wine themed” dining rooms are available for the swells.

So if you’ve got expendable income, some insider connections, and want to be seen at this month’s status symbol, read on. The wine selection is heavy on bottles from the Rhone Valley and Burgundy, near Boulud’s native city of Lyon. Food emphasizes housemade charcuterie, with items like Saucisson Sec de Lyon (sausage air-dried for at least a month) and Fromage de Tête, which is a terrine made from pig's head. For the swine-averse there are a number of tantalizing items on the menu like grilled Maine scallops with Orleans mustard, winter slaw and red cabbage marmalade. 1900 Broadway, (212) 595-0303.

Endless Summer: On the complete other end of the spectrum, this mobile Mexican pick-up joint has cheap grub, no overhead and a name all-too-fitting for last week’s January heat wave. You can find the Endless Summer taco truck parked in north Williamsburg from 6pm to 2am Wednesday through Thursday, until 4am on Friday nights, from 1pm to 4am on Saturday and Noon to 6pm on Sundays. Owner Curtis Brown promises “authentic L.A. style” tacos and burritos, at a price and time sure to seduce Billyburg night crawlers searching for stomach lining. Curbside near North 7th and Bedford Avenue.

Ushiwakamaru: Named for a 12th-century warrior, this formerly rough-edged subterranean sushi spot has recently reopened after major renovations. It’s said the former space had an atmosphere similar to the crowded little eateries clustered around Tokyo’s Tsukiji fish market; let’s hope the new incarnation retains some of that no-frills charm. The New Yorker says the variety is impressive and advises putting your taste buds in the hands of chef Hideo Kuribara by ordering the omakase, which lets Kuribara decide what fish to serve. Thrillist has the menu, which omits Kuribara’s most intriguing offering, the live shrimp head. 136 West Houston St., (212) 228-4181