The brand, which boasts 21 shops in DC, Baltimore and Philadelphia, has several hallmarks that set it apart from other Chipotle-esque chains. First, their pies are oblong instead of a circle or a square, similar to the Pie By The Pound method, but here you get the whole pizza. Second, they offer unlimited toppings if you're going the DIY route, from a roster that includes the expected to the unusual, like spicy chickpeas, shrimp, lemon, and vegan beef. 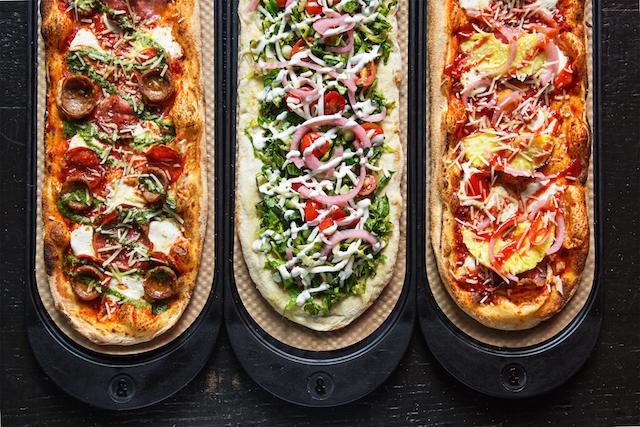 Founder Michael Lastoria embraces the street art vibe of NYC with the shop's design, employing muralist Tony Rubin and graffiti artist Bisco Smith to create signature pieces that make up the decor for the restaurant. Lingering is encouraged, even though pies only take a few minutes to bake.

Lastoria has made it a point to pay workers above the minimum wage, which for fast food workers is currently $12 in NYC, and encourage the "Tribe" to work full time and work their way through the ranks. &pizza's NYC employees will be making around $13 per hour to work at &pizza with a plan to increase to $15 per hour in the next few years, in advance of the state's forthcoming $15 minimum for fast food workers (Lastoria's an active member of the Fight for $15 movement).

The pizzerias have been a big hit in D.C., so much so that people are even getting hitched there.

#pizza
#fast casual
#new restaurant and bar radar
#nomad
#original
Do you know the scoop? Comment below or Send us a Tip