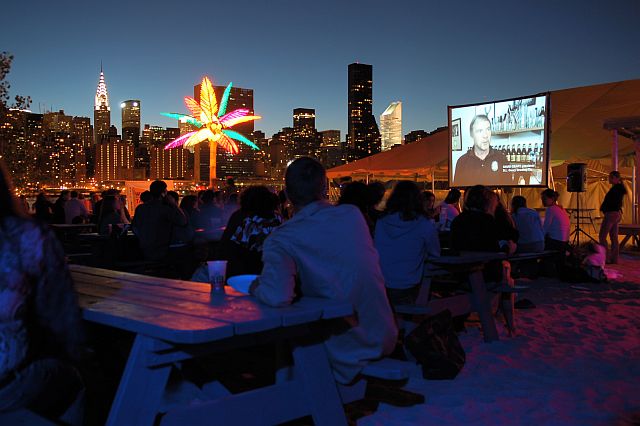 If "butter" flavored popcorn and Sour Patch Kids aren’t your ideal movie snack food, then you'll probably find the New York City Food Film Festival much more palatable. Starting Saturday at Water Taxi Beach in Long Island City, Queens, the festival will pair 18 movies with relevant munchies under the night sky. George Motz, who started the festival last year with chef Harry Hawk, says he wanted to create “a cinematic scratch 'n sniff where you can not only watch a food film but eat the food being shown in that film.” Which explains why Sweeney Todd isn't being screened.

There are 18 interesting-sounding films on the week long program, and each one is paired with edibles connected to the subject. This is My Cheesesteak, for instance, will be accompanied by cheestakes made on site by Philadelphia’s Tony Luke. The owner of il Buco, Donna Lennard, will pair her documentary La Raccolta, about olive oil traditions in central Italy, with an olive oil tasting. And on Tuesday, when the festival moves to the parking lot of Grimaldi’s for the screening of three short films about New York pizza, there will be free samples from the famous pizzeria.

All the films are free, but some edibles costs extra. In addition to the theme food, burgers, deep-fried hotdogs, French fries and a full bar will be available each night, and the location is easily accessible from Manhattan via the New York Water Taxi. Check out all of the details here, as well as a tantalizing trailer.