Hot on the heels of the impending arrival of Umami Burger, another California-based burger chain has announced its move to New York City. Crains reports that Fatburger, a popular Beverly Hills-based chain with 150 restaurants around the world, has set its sites on 10 Manhattan locations, the first of which will open in Murray Hill (natch) next spring. The chain had previously operated restaurants in Manhattan, Long Island and Jersey City, all of which closed in recent years. 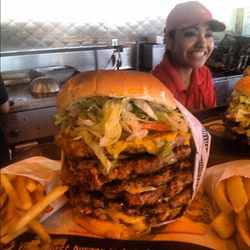 Fatburger's fresh (i.e. not frozen) lean beef patties are cooked to order, their onion rings are "made from real onions" and the shakes are hand-scooped, which gives them some street cred in our opinion. But its their ridiculously-sized burgers that really catch the

stomach. The menu features five different sizes of burgers, from the Small (a paltry 2.5 ounces) to the Unhinge-Your-Jaw-Enormous XXXL (24 ounces), which contains three patties, cheese, toppings, condiments and a whopping 1850-2050 calories. If that's not enough, add-ons like bacon, chili and guacamole can be slathered on the beef, turkey and veggie burgers or the chicken sandwiches. There are also fries, onion rings, hot dogs and a those aforementioned milkshakes to further pad the calorie count.

The 60-year-old company has partnered with The Riese Organization, whose reach in the restaurant management industry is huge (they operate Taco Bell, Nathan's and KFC, to name a few). Riese owns the building at 507 Third Avenue where the first location will open, and says it will open other locations in lower rent, residential neighborhoods rather than target more touristy locales, according to Crains. Whether Fatburger can compete with the glut of burger joints in the city remains to be seen, but if the hubbub surrounding Steak 'N Shake is any indication, we think they'll do just fine.

#burgers
#fatburger
#riese organization
Do you know the scoop? Comment below or Send us a Tip