Open Letter Urges Gabrielle Hamilton, Other Chefs To Drop Out Of Food Festival In Israel

The vague, nebulous term of “Middle Eastern food” has long been conflated with Israeli food. In New York alone, countless reviews of restaurants like Nur, Dizengoff, Miss Ada, Kubeh, and Glasserie fill all the major buzzy food sites. But a search for Palestinian food on those same sites renders almost no results.

The history of Jewish food goes back thousands of years, but the question over what constitutes “Israeli” food is intrinsically linked to the nation’s contentious borders and conflict with the Palestinian people since 1948. And the discussion over Israeli food came to a head this week, with an open letter signed by over 70 members in the culinary world—a mixture of food stars like Dimes and Ovenly, along with Palestinian grassroots organizations and their Israeli allies—urging high-profile chefs like Gabrielle Hamilton to rescind the offer to participate in the Round Tables Chef Series, a culinary food festival taking place in Tel Aviv later this month.

Round Tables is a culinary festival put on by American Express in partnership with the Israeli Ministry of Foreign Affairs, now in its fourth year. Round Tables will host chefs like Hamilton and others spanning from Slovenia to Spain to join forces by bringing their culinary skills to Tel Aviv’s top restaurants in the hopes of a positive cultural-exchange. This year is the first-ever “Special Female Edition.”

According to the Round Tables website, it is “a cultural project, an honorary member of the gastro-diplomacy movement which advocates cultural, economic and political dialogue through gastronomy, maintaining that the easiest way to win hearts and minds is through the stomach.”

“Another year, another use of culture to oppress and erase,” says Palestinian-American chef Amanny Ahmad. "Proud of the culinary community around me that has signed this letter calling for the chefs of the world to refuse to allow their work to be co-opted as part of a colonial and racist agenda." Last year Ahmad and chef Reem Assil produced a protest dinner pop-up held at Downtown Manhattan hotspots, Dimes and Lalito, intentionally coinciding with the dates of the Round Tables festival.

Round Tables remains firm that their organization has a different agenda. But after calls for a boycott intensified last year, globally-recognized chefs Mitsuharu Tsumura, JP McMahon, and Kamilla Seidler canceled their trip with Round Tables.

Yair Bekier, the co-founder of Round Tables, sees things differently. For him, the festival was made to create a flourishing cross-pollination of food across cultures.

“This is the fourth year in which we have held the exciting meeting of chefs from all over the world, the local culinary endeavor and the creation of fascinating cultural ties that strengthens Israel’s status as a gastronomic capital on a global scale,” said Bekier, in an interview with The Jerusalem Post. “This year, we decided to bring the women to the forefront of the stage, to raise awareness of the importance of women in the field and to create a bridge of creativity, one that combines the best chefs with raw materials, local culinary trends, and of course the most talented artists in the world.” 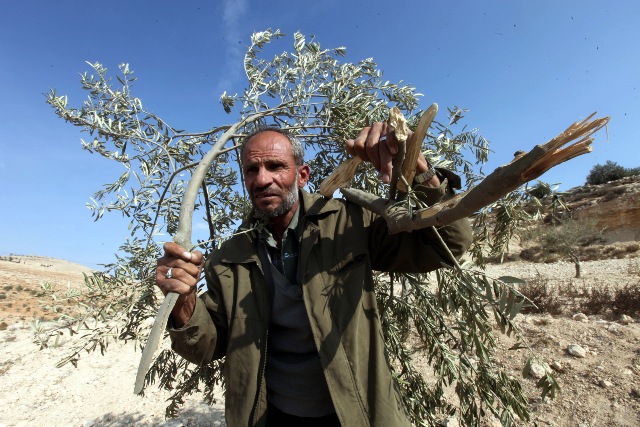 The question of land control in The Gaza Strip and West Bank has a longstanding relationship with food. In 1977, Israel passed legislation forbidding Palestinians from foraging za'atar, despite it being a staple of Palestinian cuisine and a crucial source of income for those whose jobs depend on the local agriculture. In 2006, further restrictions were placed on Palestinians that imposed infractions for bringing za'atar through the checkpoint to Jerusalem. “It is another way to use food as a way to control and limit the culture of Palestine, while Israel continues to market za’atar as an Israeli spice,” Ahmad shared in a recent interview.

“Almost one million olive trees have been destroyed by Israeli settlers or soldiers since 1948,” alleges Ora Wise, a chef and activist leading the open letter. “Palestinian farmers have access to one-tenth of the water Israeli farmers have access to. The Israeli occupation administration calculates how many calories Palestinians in Gaza can have without dying so they can keep them on the brink of starvation.”

The open letter was disseminated on BDS (Boycott, Divestment, Sanctions, a Palestinian-led non-profit) and has been shared all over Instagram, tagging the chefs like Hamilton in all the posts. The letter argues, in part:

Events such as Round Tables are part of a larger “Brand Israel” campaign to help the Israeli government normalize its ongoing denial of Palestinian rights. The Israeli Ministry of Foreign Affairs has poured resources into this campaign with the explicit intention to improve Israel’s image abroad and silence outrage over its massacres and war crimes.

While Israel hosts international chefs in Tel Aviv for Round Tables, the Israeli military will be counting the calories allowed into Gaza only 40 miles away, keeping the entire population on a state-sanctioned starvation diet. Palestinians’ farmlands will continue to be expropriated for illegal Israeli settlements in the West Bank; their homes and olive orchards demolished; and traditional Palestinian foods, including falafel, hummus, tahini, and zaatar, will continue to be claimed and marketed as Israeli. This continues on while Palestinian residents within Israel are treated as second-class citizens, a status reaffirmed legally by the recently passed Nation State Law.

Nevertheless, the group behind the open letter hopes to make clear that it is in no way advocating for anti-Semitism and contextualizes the letter with the horrific recent shooting in Pittsburgh. “As a Jew, I am always especially horrified when Zionists react to any mention of the word ‘Palestine’ by attempting to silence it with manipulative claims of anti-Semitism, because trying to erase an entire people is just never okay in my book,” says Wise, who was born in Jerusalem and is the daughter of a rabbi. “But also because it renders that word meaningless and confuses everyone.”

Read the full open letter here. Round Tables, its co-founders, the chefs who pulled out from last year’s event, and Gabrielle Hamilton have not responded to Gothamist's request for a comment.

Born and raised in NYC, Emma Orlow is a food and design writer (MUNCHIES, Grub Street, Architectural Digest, and more), public programs producer, and artist working with food. She was named a 30 under 30 by Brooklyn Magazine for 2018. You can follow more of her work @emorlow on Instagram.

#Gabrielle Hamilton
#israel
#palestine
#round tables
Do you know the scoop? Comment below or Send us a Tip