In a crisis for the Upper West Side that began only yesterday, the beloved retail location of H&H Bagels on 80th Street and Broadway announced that it's closing today. We were moved to visit the store this morning after NYC Deputy Mayor Howard Wolfson made a tweet about waiting on a long lines for one last H&H. By the time we got there around 11:30 or so, however, the line was neatly contained, stretching roughly the length of the small store and moving jauntily. Many of the customers were lining up for their first, and last, taste (at this location).

Up to the final hour, the atmosphere was cheerful, if somewhat harried, due to the time pressure and sweltering heat (a single floor fan toiled futilely against the oppressive conditions). The store's marquee sign had been ripped off the storefront, leaving behind bare wood that—along with the chandeliers that were barely visible through the steamy windows—made H&H look more like an unfriendly hipster restaurant than the neighborhood joint that it is.

For the store's workers, however, the question of the future looms large. As the H&H will live on at 46th Street, where the bagels are made and can be purchased retail, there is hope that some workers will be transferred there instead of being laid off. "We don't know anything right now," said a woman working the front counter. "We won't find out until six [when the store closes for good]." 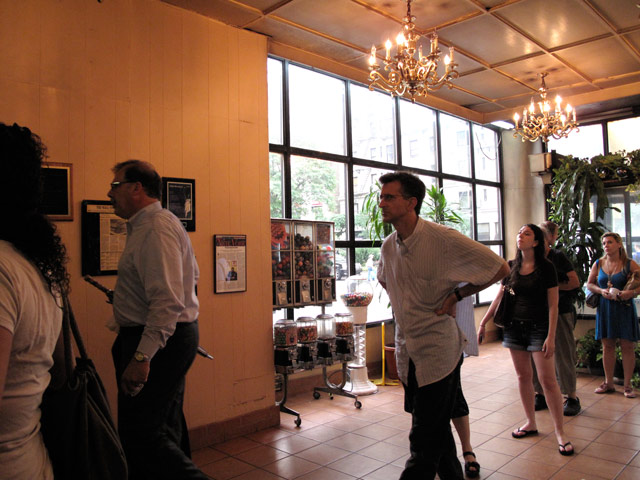 Shira Kirsner, who was enjoying bagels with a friend on the Broadway median, had an entrepreneurial idea that would help these poor souls. She divides her time between New York and Miami, where the bagels are terrible, even though some of them are made with "Brooklyn" water. "H&H could open up outposts in Miami," she mused. "They could negotiate a one-year lease with the desperate landlords there and shuffle people around, pay their relocation costs. I'm thinking of two locations, maybe one on Miracle Mile and another on Miami Beach. They'd have to bring in water from New York, though. I think it's the water in the baking that makes all the difference."

Some H&H fans aren't giving up so easily. A local resident, James Besser, photocopied a stack of flyers at 6 in the morning and left them at the front of the restaurant. The flyers called for the salvation of H&H: "We don't want another bank or cell phone outlet here," it explained. "This is a larger issue," he told us over the phone. "We want big stores out of our neighborhood. ... We’re drawing a line in the sand over H&H. We don’t want banks. We don’t want Wal-Mart. We want neighborhood stores." No problem—neighborhood pharmacy Duane Reade started right here in NYC, and they're always looking for more locations!

#closings
#end of an era
#H&H bagels
#Upper West Side
Do you know the scoop? Comment below or Send us a Tip