One In Six NYC Residents Lives In Hunger, Survey Says

The New York City Coalition Against Hunger released its hunger survey for the city today and the results aren't encouraging. Their research concluded that one in six city residents—including one in five children—suffer from food insecurity, levels they say have remained unchanged since the beginning of the 2008 Recession. The report [pdf] used three-year data averages collected by the U.S. Census Bureau regarding food insecurity and hunger statistics, as well as findings by the Coalition from a 2013 survey of 254 soup kitchens and food pantries in the city.

Food insecurity levels were highest in the Bronx, with over 36% of the population without enough to eat, up 27% since data collected pre-Recession. Food insecurity levels also increased 15% in Brooklyn and Manhattan, with 12.27% and 15.79% of the population suffering from food intake disruption, respectively. Queens actually saw a 6% reduction in the number of food insecure residents, with just over 10% lacking regular access to food. 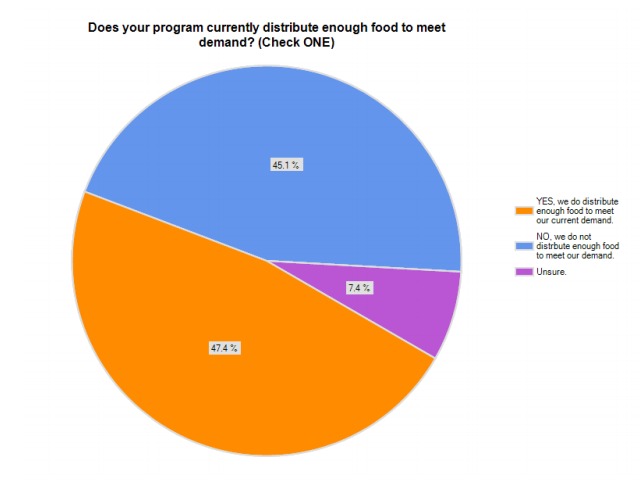 The lack of adequate funding for families to feed themselves mean many turn to food agencies in the city to supplement or fully supply their meals. City organizations have seen steady increases in demand, starting with 29% in 2009 and 10% in 2013. Many food providers—especially on Staten Island—also still feel the effects of Hurricane Sandy, with almost 60% of agencies revealing that the storm increased the amount of families needing help. However, nearly all of those agencies reported that the storm was merely one factor and that lingering trouble following the recession in addition to social service cuts played large roles as well.

Despite increased demand on the city's food providers, 56.8 of food pantries and soup kitchens saw government cuts (especially from FEMA) and decreased resources from private entities. Because of this, nearly half of the agencies were forced to scale back operations in some way, either by reducing the amount of food they distributed or limiting the times they were open and serving meals. These factors coupled with massive SNAP benefit cuts and the end of the American Reinvestment and Recovery Act means a much heavier burden on food distribution agencies who simply aren't able to keep up with the demand.

#food insecurity
#hunger survey
#new york city coalition against hunger
#nyccah
#snap benefits
Do you know the scoop? Comment below or Send us a Tip