On the Grill's Shwarmic Wonder Wheel 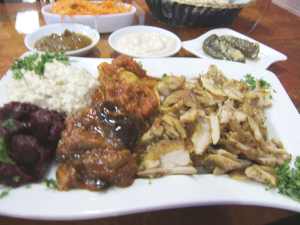 As much as Gothamist tries to be on the bleeding edge of the food scene in Queens, sometimes only an old favorite will do. Which is exactly what happened the other day when we found ourselves standing in front On the Grill craving chicken shwarma.

This three-year old Israeli spot serves up some of the city's best shwarma, and it had been months since we'd had eaten any. So we were jonesing for some of this rotating wonder meat, which is a perfect combination of crunchy bits and tender morsels. In our absence they've added Moroccan style jalapeños, which are fried and then marinated in lemon, vinegar, oil and garlic.With a lemony zing and just a tiny bit of heat, these little suckers are just made for munching on between forkfuls of meat.

The veggie dips were outstanding, including a smoky baba ghanoush and a matbucha whose sweet peppers and onions were reminiscent of an Italian grandmother's caponata. We also enjoyed mellow beets that left cool-looking purple rivulets in the neighboring eggplant spread. In case you're wondering, the falafel here is excellent, largely because the Yemenite Israeli chef has had plenty of practice. He's been making the crunchy little balls since he was knee high to a deep fryer.