We've lost a lot of good old-school bars over the years (RIP Milady's, we loved you so). But Old Town Bar, located on East 18th Street by Gramercy Park, has been holding strong since 1892, having served over the years as a German-American salon, an alleged speakeasy, a blue-collar hangout, and a pivotal location in Whit Stillman's film The Last Days of Disco. Last weekend Old Town celebrated its 125th anniversary, and in anticipation, we spoke with bar owner Gerry Meagher about Old Town's history, Union Square in the Bad Old Days, and those famous urinals.

Can you tell us a little about the bar's history? How did it get its name?
It started in 1892 and it was originally, like a lot of taverns in New York in the 1890s, a German-American place. It was originally owned by Jacob Berckel. [He and his manager] ran one of the original salons. We have a card that was sent to us by the manager from the 1890s, it was a business card they used in those days.

Jacob Berckel ran it, from what we understand, to the early part of the 20th century. And then it was taken over by a fellow named Viemeister, who was another German-American. It continued as an old-style German-American tavern up until Prohibition, around 1918, when it became Craig’s Restaurant. We don’t have it verified that they serving liquor in those days. There are some booths you pull out, and what we were told is that liquor was put underneath the booths whenever there was a raid, which the bar was usually told about in advance. So it seemed to operate as sort of a speakeasy in those days. After Prohibition, in 1933, it became The Old Town Bar & Restaurant, which was taken over by another German-American family, the Lohdens.

Henry Lohden took over the bar in 1952. The area was pretty bustling in the '30s up until right after the war, and then it declined. There were a lot of department stores in this area at that point and they all moved uptown, so the business declined. My father was aware of it because he worked for newspapers as a photo engraver and his union office—he was the union representative—was around the corner. He would come in Old Town in the 1950s, when it was kind of quiet and open 9 to 5, and he realized that this was a beautiful old place that could be really great. When the newspaper that he worked for closed, he opened a couple of bars in Brooklyn, where he operated for about 10 years. But he would come over and see Henry Lohden, and he said, “I’ll open Old Town up at night and see what we can do." That was in the late '70s.

Then, the business was mostly truckers who worked for the printing plants around here. Henry let [my father] open the bar at night and business started to pick up. The first customers were, like, Andy Warhol, whose studio was around the corner, and some other characters. But eventually this area started to move up, and food was brought back (food service had been dropped in 1960) and my father opened up the upstairs, which had also been closed since 1960. As Union Square cleaned up and the neighborhood improved, the operation began to thrive. And when Henry died in the mid-'80s, he was so pleased with what my father did to revive the place, he left half of the place to him and half to his wife. That’s how we got involved in the late '70s, early '80s. And that’s where we are today. 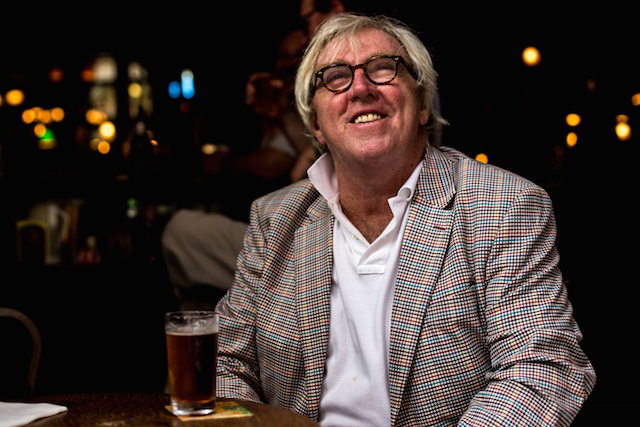 Did you spend a lot of time in the bar when your father first took over?
I was working in advertising in the '80s and I would bartend at Old Town one night a week.

Do you have any fun stories from back when you were bartending?
There are some fun stories [laughs]. None that I'd want to share.

What in the bar is original?
Most of the fixtures in the place remain as they were. The bar itself is mahogany, and mahogany wears very well, so we have the really long 90-foot bar. The booths, the bar, and the cabinets are all original mahogany. The ceiling and our beautifully-laid tiled floor.

New York is an ever-changing place and we've lost a lot of long-standing bars over the years. How do you resist the temptation to turn Old Town Bar into something newer and sleeker?
My father’s philosophy was not to be trendy. Implicit in that is that your trend will not last. He liked to keep Old Town Bar like an old New York tavern. Fortunately through Henry’s good graces, we own the building, so we can run the bar profitably with reasonable prices. We’re able to extend our reach to just about any working person, because we don’t have to pay $50,000 a month in rent, or whatever. We can still get a lot of the working men, the construction guys, as well as the younger tech-oriented people.

Because we own the building, we’re able to maintain that old New York tavern feel. What my father wanted to do, which we've maintained, is to make it a place where people can talk and meet, and not overload it with TVs and loud music and such. We try to keep an atmosphere where the focus is on people talking, and meeting people, and talking about ideas and such. That seems to have worked.

What are some changes in the neighborhood that you’ve seen over the last 30 years or so?
The Barnes and Noble store at Union Square North was an empty building for like 40 years. There were other buildings that were just not used in those days. So when Barnes and Noble came in, it really created interest in the neighborhood. Union Square Park used to be a drug haven, and a place that you would avoid. But with the farmers market, and the Union Square Development Corporation and such, Union Square has come back incredibly well. Park Avenue South has started to attract a lot of big, interesting businesses, like BuzzFeed. Now Facebook is coming in down the street from us. Union Square was revived, and we really benefitted from that.

How did the TV shows and Hollywood start coming into play?
When Henry Lohden was running the place, he didn’t want to do any shooting because it would upset the schedule of his five or ten customers. Some people came in with some pretty good offers, and he was hardly getting by at that time, but he still resisted. My father said that he would entertain those offers if he was in charge, and once Henry died and my father took full control, he started allowing movies and TV shows [to film]. In 1985, they filmed the opening scene for the Letterman show. It's one of the first things we had there, I think.

We have a really high ceiling, a 19-foot ceiling, and it lends itself to productions, because you can put lights up and have different angles for lights and cameras. A lot of the old places have lower ceilings, so they’re a little more constraining for shoots.

What are some other old New York bars you like?
I was a big fan of the original Chumley’s, which was completely demolished. [Editor's note: Chumley's reopened last year after a long closure.] Most of the places I really liked are no longer there. Harvey’s Chelsea House on 18th Street was a beautiful and terrific place, but that’s been lost. I’m a big fan of Fanelli's, which has a lot of character, and the Ear Inn is warm and inviting as well. 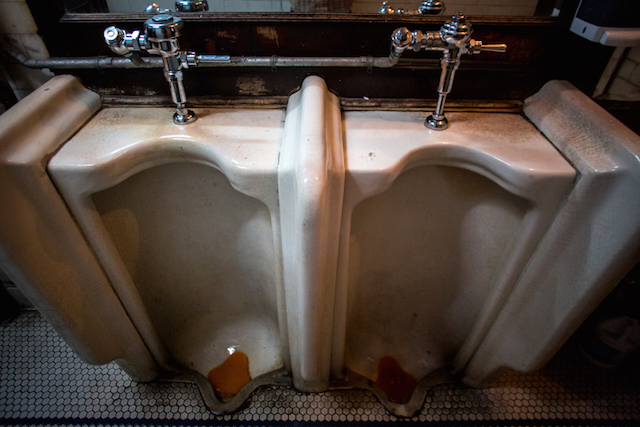 Can you talk a little about the urinals?
We noticed that on top of the urinals it says, “Patented October 1st, 1910," and people always remark on how grand the urinals are. So in the early part of this century, we said that when 2010 comes around, we really have to celebrate these urinals. We actually had a 90th anniversary party as a warmup, but when the 100th anniversary came up, we knew one of the good printers in Nashville, Tennessee, and we had an old poster done up to celebrate the urinals.

Steve Rushin, who writes for Sports Illustrated, once wrote something about his perfect ballpark, and said that one of his elements would be the urinals from the Old Town in New York. So we contacted Steve and he was our guest speaker, he spoke about the urinals and gave a little speech at our little party and we had a champagne toast. We invited a lot of people and it was quite a celebration. It was really odd but everybody had a great time, and Mayor Bloomberg sent a wonderful humorous letter celebrating the hundred anniversary of the urinals. We had a lot of staff people from Bloomberg who were our customers, so they executed that. And we got a nice write up in the Wall Street Journal, so it was a very fun day.