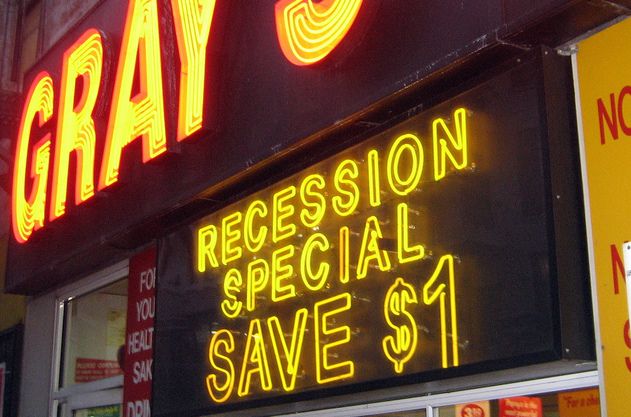 Photo of the still open Gray's Papaya by Wallyg

Especially telling is that many of the auctions involve seasoned operators rather than neophytes who miscalculated their ability, the strength of the market or both. An example is Frank's, a chophouse in the meatpacking district that has been owned by three generations of the Molinari family. It closed two weeks ago, along with its adjacent butcher shop.

Co-owner and executive chef Christopher Molinari blames the closure on – no surprise – the exorbitant rent at Frank's location in the Chelsea Market. According to the Sun, rents for retail space in Manhattan have increased by double-digit percentages for the last several years, causing many new restaurateurs in the highly competitive business to find additional revenue by adding bars, merchandise and, in some cases, utilizing underused basement space, which one broker insists we “now call a concourse.” We’re also seeing more wine and tapas joints because the overhead is low and “small plates can quickly add up to large bills.”

Crain’s also hears from a theater district restaurateur who says recession-wary diners are getting more tightfisted, splitting entrees, getting the prix fixe or just coming in for a glass of wine. And with Wall Street in a tailspin, it looks like the restaurant industry can count on continued suffering along with everyone else, especially in Manhattan where, as the COO of real estate firm Cushman & Wakefield puts it, “the retail market is an anomaly.”

Has the anomaly swallowed up your favorite restaurant yet?