In December 2017, a devastating Eater exposé revealed rampant sexual misconduct by NYC-based celebrity chef Mario Batali, leading to Batali taking a leave of absence from his large network of businesses. Then the NY Times followed up, with a look at misconduct from restaurateur Ken Friedman, whose West Village establishment Spotted Pig was a frequent haunt of Batali's, so much so that "employees and industry insiders" nicknamed a third-floor space "the rape room." Now 60 Minutes has more details, plus confirmation from the NYPD that they are investigating sexual assault allegations involving Batali.

Jamie Seet, a former manager at The Spotted Pig, elaborated on an incident she told the NY Times: That, in 2008, she and other employees stopped Batali from groping a woman who appeared to be unconscious. Seet told 60 Minutes' Anderson Cooper, "We were in the third floor of the restaurant, and there are cameras. And there had been a party. And it dwindled down to two people, Mario and then this woman."

Seet says she was counting the evening's receipts in the office and watched on a video monitor as Mario Batali began to reach his hand up between the legs of the woman.

Jamie Seet: She was-- you know, she looked like this. So that to me looks like someone is unconscious.

Anderson Cooper: And he actually-- You saw him pull up his chair and start to touch her?

Anderson Cooper: When you saw that on the monitor, what did you think?

Jamie Seet: You know he crossed a line. A huge, a huge line, as of-- to doing-- assaulting someone that's unconscious.

Jamie Seet: So we all went out there, and we-- we stopped what was going on. "Hey Mario. How are you doing? Let's get you a cab." Just-- you know, we were saying something just to snap him out of this.

Anderson Cooper: You have no doubt you saw Mario Batali--

Jamie Seet: Yeah, no doubt at all, and to this day I'm-- I feel ashamed that I never called the police.

Seet, Natalie Saibel, and other female employees came forward after they realized they all had terrible stories of sexual misconduct, after the Harvey Weinstein sexual assault allegations catalyzed the Me Too movement. Former Spotted Pig server Trish Nelson explained that they referred to Batali as the Red Menace, "because it was a warning. The Red Menace is here. You know, like, pull all of your bits in, Mario's in town." Seet also demonstrated how Batali once reached over and grabbed her breasts while she was serving him: 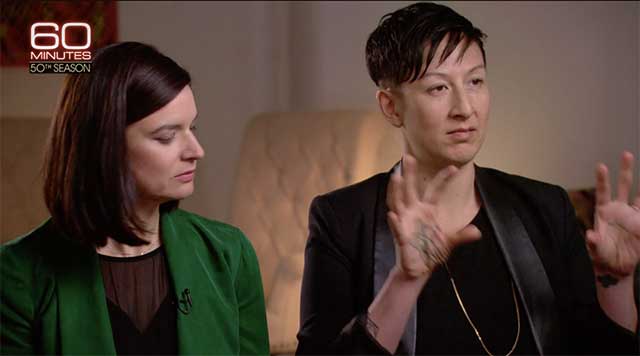 A former employee at Batali's four-star restaurant Babbo told 60 Minutes that Batali invited her to The Spotted Pig one night in 2005. She didn't remember what happened after kissing him on the second floor, "I woke up by myself on the floor, I don't know where I am, of an empty room, wooden floor. I see broken bottles. The first thing I think is, "I've been drugged.' That was the first thing I thought is, 'I've been-- I've been assaulted.' ... My right leg was very deeply wounded, like, scratched, like, deep scratches."

She added, "I didn't feel any trauma internally. But I also did find-- I looked on my skirt-- There were two areas. It looked like DNA." Cooper said, "Semen," and the woman confirmed, "Semen."

When she confronted Batali the next day to ask what happened, she says he refused to speak to her. From 60 Minutes:

After her shift she says she called a crisis hotline and went to a hospital for an examination. Four people confirmed to us that she told them what happened at the time, one of whom accompanied her to the hospital. She says she also went to speak with a detective at the New York Police Department's Special Victims Division.

Woman: They tried getting me to file a report. They tried, they tried. But I-- you know, a young actress, no resources, no money. I couldn't. I-- I couldn't do it.

Batali told 60 Minutes, "I vehemently deny the allegation that I sexually assaulted this woman. I am not attempting a professional comeback. My only focus is finding a personal path forward - a path where I can continue my charitable endeavors - helping the underprivileged and those in need."

Batali, who also referred to statements he gave Eater and the Times in December, was reportedly "eyeing a second act" as recently as April. But now B&B Hospitality, the company he operated with partners including his Babbo co-owner Joe Bastianich, is moving to cut ties with Batali. In a statement issued last night, the hospitality group claims "this was the first we learned" of the sexual assault allegations: "Our partnership with Mr. Batali is ending. We have been actively negotiating with Mr. Batali to buy his interests in the restaurants, and he and Joe Bastianich have signed a letter of intent that sets forth the broad terms to do so. We expect to have the final terms set by July 1, and that Nancy Silverton, Lidia Bastianich, Mr. Bastianich, and other current investors will participate in the acquisition."

Update: The NY Times and Daily News report that the NYPD is investigating a different sexual assault allegation against Batali, this one a 2004 incident where a woman says the chef raped her. From the Times:

In that complaint, which has not been previously reported, a woman told the police on March 15 that Mr. Batali drugged and sexually assaulted her in January 2004 at his Greenwich Village restaurant Babbo. The woman told the police she had been drinking at the bar and went upstairs to use the bathroom, according to the person familiar with the complaint, who spoke on the condition of anonymity. Her next memory was waking up as Mr. Batali was raping her.

According to the News

, "The victim went to police in March though the assault happened in 2004, according to sources with knowledge of the complaint."

#ken friedman
#mario batali
#nypd
#sexual assault
#spotted pig
Do you know the scoop? Comment below or Send us a Tip