We can gripe about the proliferation of yogurt shops, juiceries and bank chains but there can never be too many cat cafes. To that end, meet Koneko, another feline-friendly visiting spot slated to open mid-September on Clinton Street, just a quick 12 minute walk from NYC's first cat cafe Meow Parlour. And while both establishments share the same mission—namely to give cuddle-starved New Yorkers a spot to pet a furry friend and felines the chance at a forever home—there are some notable differences that make this new offering more than just a place to make a new BFF.

First and foremost, this will be a real cafe (Meow Parlour doesn't technically sell food on-site), with what founder Benjamin Kalb describes as Japanese bar snacks and pastries; "kind of a little bit izakaya, but not really," he says. "It's kind of my own take on that culture of food in Japan." He certainly knows food; besides trips to the country to experience cat cafes first hand, Kalb also spent time on the line at David Bouley's eponymous eatery in addition to a front of house gig at Momofuku. As required by the DOH, the cafe section will be separate from the "Cattery," but customers can take their meals with them to visit the kitties.

(A space designed by CO-Office)

Through a large window, cafe visitors will be able to look into what Kalb and his team have dubbed the "Cattery," a section ruled by the kitties and filled with lots of different play elements and hidey holes. There'll be three distinct sections to that space, including an upstairs and downstairs and an outdoor cat garden, something Kalb says is likely the first of its kind. "It's not an enclosed space, but we're building it very specifically to make sure that cats won't be able to climb the walls and hop the fence and also that cats in the neighborhood won't be able to jump in," he assures us. "The top of it is exposed, but we're really making a strong effort to ensure that it's safe." 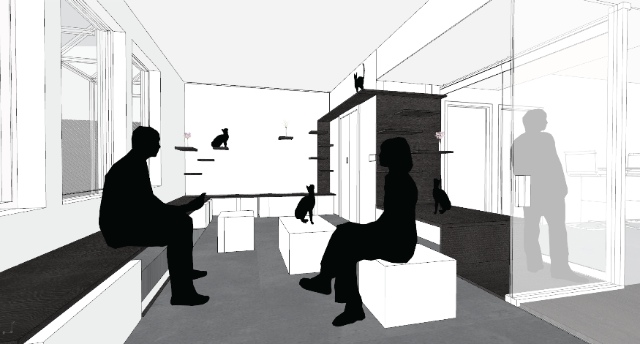 (A space designed by CO-Office)

Also unique for NYC's (hopefully) burgeoning cat cafe population: alcohol. "At night, the cafe will kind of double as a bar and an after work-type spot," Kalb tells us. "We did get a beer and wine license." Ways to make Happy Hour better: add cats!

Reservations are already open beginning on September 14th, which Kalb images will kick off a few weeks of sort opening before a big Cat Gala that'll serve as an opening party and a fundraiser for Anjellicle Cats Rescue, City Critters and K9 Kastle, the three rescue organizations that'll pimp out their kitties for adoption. Reservation slots are one hour at $15 per person or $10 for a 30-minute slot for walk-in visitors.