Earlier this year, an adorable pop-up cat cafe brought out New Yorkers' inner cat lady, giving those of us willing to wait on line for hours the opportunity to play with the fuzzy felines and get caffeinated at the same time. But a four day storefront wasn't nearly enough to satisfy our kitty cravings and luckily, a new permanent cat cafe is in the works.

NYC's first permanent cat sanctuary and tea house, Little Lions, began their crowdfunding campaign this week, seeking out $65,000 in startup funds to bring the dream of meows and mates to life. Founder Erin McShane has been working for nearly a year to get the operation underway after a friend introduced her to Lady Dinah's Cat Emporium in London. After the success of this spring's pop-up, McShane felt validated and knew it was time to make her dream a reality.

Little Lions will work with Anjellicle Cats Rescue and the ACC to provide an atmosphere that's conducive to the felines, all of which will be available for adoption should a love connection start over a cuppa. "The only caveat is that people who would like to adopt will need to be vetted to ensure our kitties are going to loving homes, including a home visit," McShane explained. "It will not be as simple as picking a cat you love and taking them home, but applications will be available on site at Little Lions which will 'hold' the cat and start the adoption process." Adoptable kitties will have free reign of the space, including a cats-only section where they can go for a rest between playtime and petting. 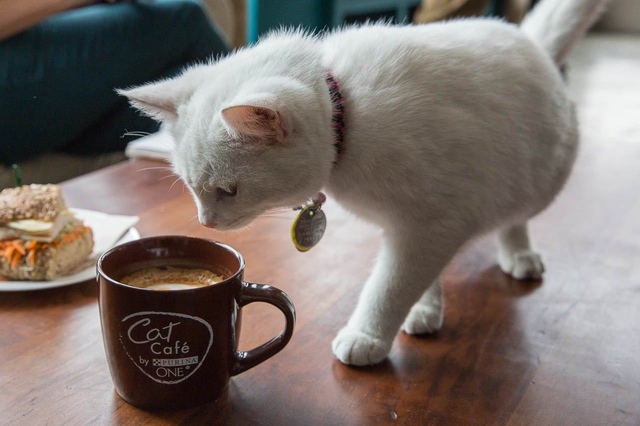 The cafe portion of the operation will consist of a tea program of some kind, with other drink options available. "There will be a coffee option but probably not a full barista menu," says McShane. "I want the space to be soothing and tranquil and loud coffee machines are probably not conducive to that vision." As for food, McShane says if anything it'll be some small items and that "nothing will be made on site and would have to be cat-safe."

As with any fledgling business, the tea house will have to get approval from the DOH, an added hurdle given the agency's stance on animals in food service establishments. "The DOH is on board with my design on how to accomplish complete separation between the cats and tea house," McShane assured us. "They of course cannot provide an actual approval and a health grade until we are close to opening, but we have had extensive conversations around physical separation as well as employee and storage separation requirements and I feel very confident they will provide both an approval and an A health grade." We've reached out to the DOH and we'll update when we hear back.

So far, the cafe itself is homeless, but McShane has been eyeing some downtown properties, mostly on the east side. Once opened, admission inside will be around $5 for one hour, which will be used to "cover the costs of caring for the cats including food, litter, toys, vet bills, cleaning etc." If funding goals are met, expect Little Lions to open sometime in spring of next year. After that, it's all kitties all the time.