Lumos NYC would be nearly unrecognizable from the street if not for the bouncer standing in front of a staircase that descends below a hat shop on Houston Street. Inside, the bar is introducing a new audience to its specialty, baijiu, a Chinese liquor that's only now catching on in this side of the world. What is baijiu exactly? Lumos co-founder Orson Salicetti offers a three-point primer: “It’s the oldest spirit in the world, there are more than seven categories, and always start with the rice baijiu.”

Baijiu ("bye Joe") is actually an over-arching term for liquor, roughly translating to "white liquor" in Chinese. Baijiu doesn't refer to one spirit—they're categorized into different "scents," ranging from "rice" scent on the light side of the spectrum to "strong" and "complex" scent on the other end. Baijiu is also the world's most consumed form of liquor; that's what happens when you have the most populous country in the world. According to data from International Wine & Spirit Research, Chinese people drank over 11 billion liters of baijiu in 2012, accounting for more than one-third of all spirits consumed in the world.

The most important thing: it averages a stumbling 110 alcohol proof. "I thought it tasted like paint-thinner and felt like a liquid lobotomy," said Michael Pareles, manager at the U.S. Meat Export Federation in Beijing, told Reuters. "However, like many other things in China, I eventually grew to like it."

That's the tension at the heart of baijiu, a dichotomy that keeps one from dismissing the polarizing liquor long enough to end up loving it. I tried it for the first time with Salicetti, who poured me a small cup of "strong scent" baijiu at a recent media introduction. We clinked shots, I took it down, and my first thought was warmth. Surprising warmth, all the way down, unlike the warmth that blooms in your stomach from whiskey. At the same time, it smells and tastes fruity and floral, something unknown that you haven't thought about for years and can't put your finger on it. Or, as one of the bar's publicists suggested: "I feel like it smells like sex." 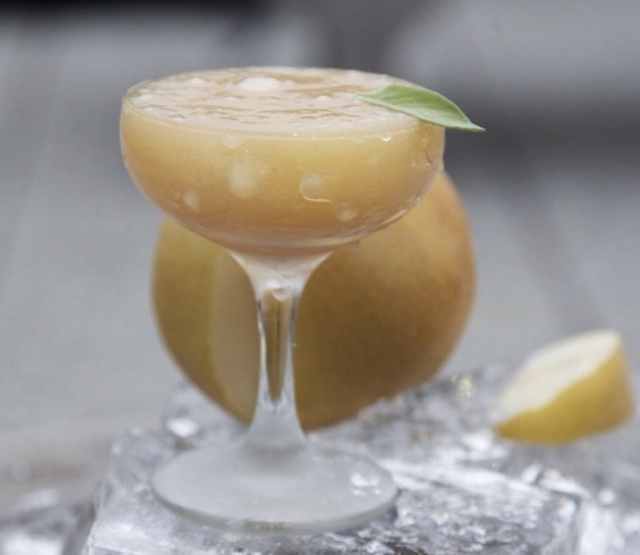 Whether it personally turns you on or off, baijiu is storming Western countries right now, as Chinese distilleries expand into new markets. Hong-Kong Baijiu, the spirit brand that Lumos partners with for their cocktail endeavors, has been specifically crafted to appeal to North American and Europen palates. "Just as Hong Kong is a gateway to China, HKB is a gateway to baijiu," read HKB promotional materials. Salicetti is also a recent convert to baijiu, having discovered it when his friends brought bottles back from the Beijing Olympics. When asked why he was starting a baijiu bar now, Salicetti responded, "Why not? We have 20 bars about whiskey, 10 about wine. Why not a baijiu bar?"

A subtler introduction to baijiu would be through cocktails, which Salicetti paraded out to show the spirit's versatility. The Otoño ($15)—a combination of fig-infused baijiu and apple cider—felt the most familiar to fall palates and though the spirit demurred a bit to the preparation, the distinctive baijiu flavor was still detectable. The Asian Pear ($15), which Salicetti assembled at the bar with fresh pear and singed sage, was the strongest cocktail I've had all year. No matter what the combination, the baijiu still lingered, nearly but not quite overpowering the cocktail ingredients and infusions. Unlike other establishments, baijiu is the only spirit Lumos serves at the bar. 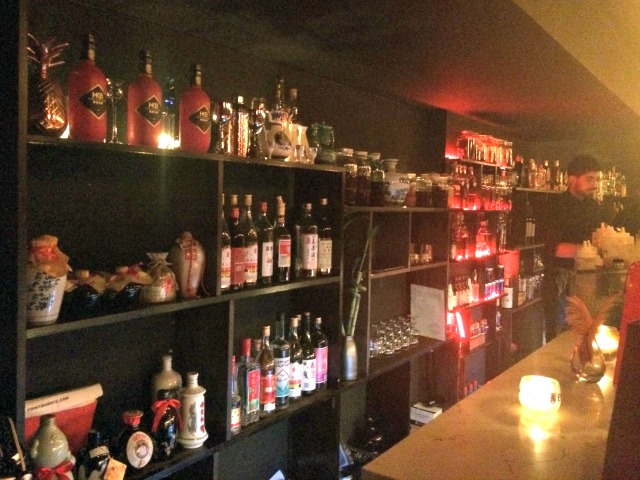 Here, Lumos tries to strike a balance between an authentic Chinese experience and what they think Westerners will be more open to. While they provide baijiu to drink neat, the traditional way the Chinese drink the spirit, they recommend that customers drink the cocktails first to get an idea if they like the distinctive flavor. Lumos carries a wide array of baijiu, all the way up to the “strong” and “complex” scents, the strongest baijiu in production. But almost all cocktails are made with Hong-Kong Baijiu, giving every liquor a fruitier, milder taste that gels with the many shelves stocked with jars of fruit- and spice-infused baijiu concoctions.

While Lumos is the first bar to use baijiu exclusively as it’s main ingredient, plenty of other bars have jumped on the spirit bandwagon. We’ve previously noted Fung Tu on the Lower East Side, serving The Baijiu Bijou, made with Hong Kong BaiJiu, Chartreuse, and sweet Dolin vermouth. On the Upper West Side, RedFarm offers a drink that mixes baijiu with tomatoes, basil, and vinegar, while the JakeWalk out in Carroll Gardens has concocted “Shaolin Land,” a complex drink combining baijiu with an Italian myrtle berry liqueur. You can also find baijiu in drinks at The Clover Club in Cobble Hill, hotel bars the Clement in The Peninsula Hotel and The Park Hyatt, and Huckleberry Bar in Williamsburg.